Workers Quit Jobs at a Record Level in November 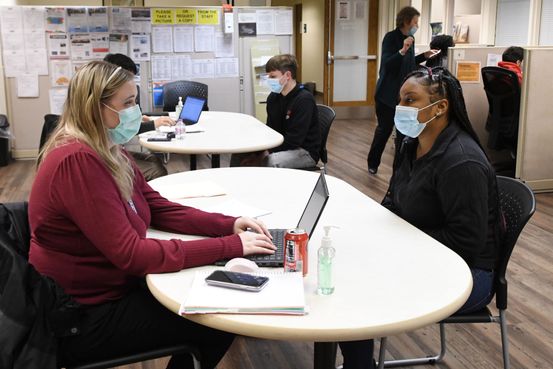 The Labor Department on Tuesday said there were 10.6 million job openings at the end of November, a decrease from 11 million the prior month. The total number of quits reached 4.5 million after slightly falling in October from the previous month. The quits rate was 3%, up from 2.8% the prior month and returning to a record rate last seen in September.

The figures lag behind private-sector data by about a month and won’t reflect any impact from the Covid-19 surge from the Omicron variant, which started building in December and is creating disruptions in parts of the economy.

“Workers continued to switch jobs in light of the many opportunities the current labor market provides,” said

an economist at Indeed.

“The low-wage sectors directly impacted by the pandemic continued to be the source of much of the elevated quitting,” Mr. Bunker said, adding that he is watching to see the extent to which the conditions continue this year.

U.S. job openings and workers’ willingness to leave positions have remained elevated with an imbalance between openings and available workers. In November, 6.9 million people were unemployed but say they want work, meaning there were roughly two workers for every three openings.

Employers’ hiring needs and the level of quits started hitting records last spring and have persisted. Labor-force participation—which refers to the working-age population that is either employed or seeking employment—has remained below pre-pandemic levels, at 61.8% in November and well below January 2020’s level of 63.4%.

Angela Jia Kim, owner of Savor Beauty and Spa in New York City, employs 20 people selling skin-care products online and services at two locations. Ms. Kim said she has faced turnover in workers since she rehired staff as the economy improved at the beginning of last year.

“I had maybe two or three just say that they’re moving to Colorado or Arizona,” she said. “They just left with no notice.”

“I think it was the stress. It was stressful because of the new normal. It wasn’t the way we were doing business before because now there are way more sanitation protocols, way more (personal protective equipment). It was just out of their comfort zone,” she said.

Ms. Kim said she also has struggled filling vacancies for both the front desk and for estheticians. “It’s just been really tough to find the right people for the right openings,” she added.

Workers have remained on the sidelines as the pandemic continued. Some workers have retired, while others faced child-care issues or were fearful of Covid-19 in the workplace.

Omicron could dent the labor market if school closures and child-care disruptions in particular limit people’s ability to work, said

Some K-12 schools have already changed plans for students returning from the holiday break, either temporarily starting school remotely or canceling classes.

“The biggest thing to watch is participation—if Omicron affects it. That’s what I’m really worried about as we get into January,” Ms. Swonk said.