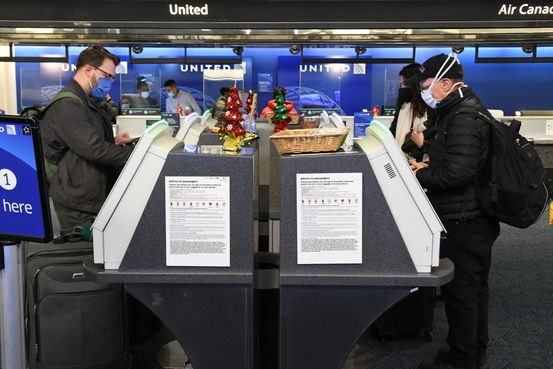 is canceling dozens of flights over the holiday weekend as a surge of Covid-19 cases affects crews, and

also cited the Omicron variant as a factor behind a number of cancellations.

United has canceled about 136 flights scheduled for Friday, about 7% of its planned schedule, and about 28 that were slated for Saturday, according to FlightAware, a flight-tracking site.

United said it was scrubbing some flights as a step in an effort to minimize last-minute disruptions. Some pilots and flight attendants won’t be able to work because of Covid-19 infection or exposure.

“The nationwide spike in Omicron cases this week has had a direct impact on our flight crews and the people who run our operation,” United said in a statement.

A United spokeswoman said the carrier is taking steps such as using larger aircraft and rerouting pilots to cover flying.

Delta said there are multiple factors behind its decision to cancel some flights in the coming days, including the impact of the Omicron variant and potentially bad weather in some areas.

“Delta teams have exhausted all options and resources—including rerouting and substitutions of aircraft and crews to cover scheduled flying—before canceling around 90 flights for Friday,” the airline said in a statement.

said it canceled 17 flights Thursday after some employees reported that they may have been exposed to the virus, and said it may have to cut more. The airline said it was offering “extra pay for our healthy employees who can work added shifts into this upcoming Christmas weekend.”

Airlines have said they expect this week and next to be among the busiest since before the pandemic. U.S. airports have been bustling even as restaurants, entertainment venues and other businesses have started to feel the effects of the surging case numbers.

Other carriers have cautioned in recent days that there could be worker shortages that disrupt operations as the Omicron variant races across the U.S. The Centers for Disease Control and Prevention currently recommends that fully vaccinated people with breakthrough infections remain isolated for 10 days—something that the chief executives of Delta and

have asked to shorten.

Airlines for America, a trade group that represents major carriers including United, Delta and JetBlue, echoed that request in another letter Thursday.

“That workforce is essential to enable Americans who need to travel domestically or internationally and to keep cargo supply chains operational,” A4A Chief Executive

“As with healthcare, police, fire and public transportation workforces, the Omicron surge may exacerbate personnel shortages and create significant disruptions to our workforce and operations.”

The CDC on Thursday updated its guidance to recommend that healthcare workers with Covid-19 who don’t have symptoms can return to work after seven days with a negative test and that isolation times can be further cut if there are staffing shortages. The agency specified that its new guidelines apply only to healthcare workers.

Several carriers were already dealing with labor shortages as they restored flights this year, though United has largely avoided many of those problems.

United was among the first major U.S. companies to impose a strict vaccine mandate on its workforce. The airline has said that most of its 67,000 U.S. employees are vaccinated, including all its customer-facing workers, while 2,000 requested exemptions for medical or religious reasons. Delta has imposed a $200 monthly surcharge for unvaccinated workers and has also said that most of its workforce is vaccinated.

Corrections & Amplifications
United has canceled about 28 flights slated for Saturday, according to FlightAware, a flight tracking site. An earlier version of this article incorrectly said Sunday. (Corrected on Dec. 23)