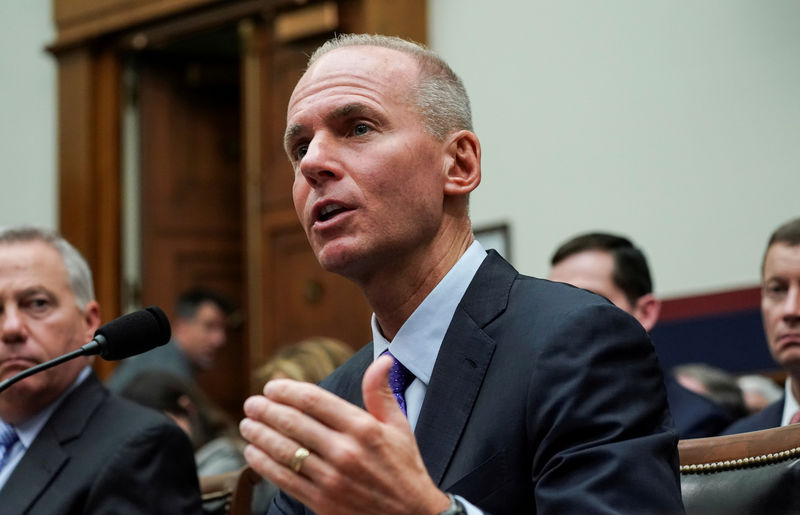 WASHINGTON (Reuters) – The chairman of the U.S. House Transportation and Infrastructure Committee and the head of its aviation subcommittee said on Monday that it will continue its investigation into two fatal 737 MAX crashes after Boeing’s testimony prompted new questions.

Representatives Peter DeFazio and Rick Larsen said in a joint letter to fellow lawmakers that Boeing (NYSE:) Co Chief Executive Dennis Muilenburg’s answers at Wednesday’s hearing “were consistent with a culture of concealment and opaqueness and reflected the immense pressure exerted on Boeing employees during the development and production of the 737 MAX.”

The letter said the victims’ loved ones “deserve a thorough investigation from our Committee about how the regulatory system and the law failed, and that’s exactly what our committee intends to do.”

Boeing spokesman Gordon Johndroe said Monday the company “will continue to cooperate with the committee.” The Federal Aviation Administration (FAA) declined to comment.

Muilenburg and Boeing Commercial Airplanes Chief Engineer John Hamilton’s testimony prompted “a litany of new questions for both Boeing and the FAA about the failures that led to the tragic and unnecessary deaths of 346 innocent people.”

The committee released documents about Boeing’s decisions during the development of the MAX and a key safety system known as MCAS that led to the two fatal crashes and the plane’s grounding in March.

“Our investigation shows that from almost the start, Boeing had a bad design on MCAS with a single point of failure. Then, Boeing couldn’t even meet its own design requirements. MCAS was fundamentally flawed, and according to Boeing’s own analysis, could result in catastrophic consequences in certain cases,” the letter said.

The letter said the operation of MCAS on the two deadly flights violated Boeing’s own design criteria for MCAS that required that “MCAS shall not interfere with dive recovery” and “MCAS shall not have any objectionable interaction with the piloting of the airplane.”

The letter referenced Muilenburg’s testimony Wednesday that the plane would have been grounded after the first fatal crash in October 2018 if the company knew then what it knows now.

“Our investigation has already shown that Boeing leadership was aware of many of the problems that engineers are now attempting to fix during the design and development phase of the 737 MAX,” DeFazio and Larsen said. “The bottom line is that there are a lot of unanswered questions, and our investigation has a long way to go to get the answers everyone deserves.”

The FAA in recent days has been conducting a software audit of Boeing’s planned new safeguards to MCAS and other architecture changes to the MAX. The FAA will not unground the MAX until December at the earliest.

PrevPreviousApple Tackles the California Housing Crisis. Here’s What You Need to Know
NextAsian shares near July peak as optimism grows on trade, economyNext