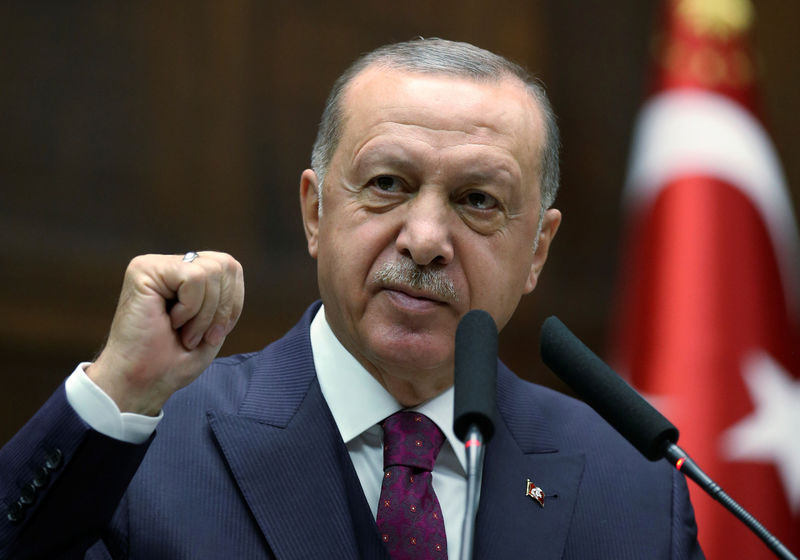 ISTANBUL (Reuters) – Turks’ support for President Tayyip Erdogan surged last month, when Ankara launched a military incursion in northeastern Syria to clear the Kurdish YPG militia from near its border, a survey by Metropoll showed on Tuesday.

Erdogan’s approval rating rose by 3.7 percentage points in October to 48%, the survey showed, its highest level since shortly after presidential elections in June of 2018, which were held before last year’s currency crisis took hold.

His disapproval rate fell 9.3 percentage points to 33.7%, its lowest level since a failed coup in July 2016. Some 18% of participants did not respond to the survey question or said they had no idea.

Since the worst of the crisis, which knocked 30% off the value of the lira last year, Erdogan’s support had eroded as inflation and unemployment surged and the economy dipped into a recession.

Ankara, as well as most Turks, see the YPG as a terrorist organization and an extension of the outlawed Kurdistan Workers Party (PKK) in Turkey. The PKK has waged a separatist insurgency against the state since 1984 and some 40,000 people have been killed in the conflict.

Four of the five political parties in the Turkish parliament have strongly supported Turkey’s operation against the YPG. The pro-Kurdish Peoples’ Democratic Party (HDP) opposed it and said it was aimed at boosting dwindling support for Erdogan and his AK Party.

Ankara launched its operation on Oct. 9, days after President Donald Trump abruptly decided to pull U.S. troops out of northern Syria following a phone call with Erdogan. The attacks were met with international condemnation.

Turkey later reached separate agreements with Washington and Moscow and stopped its operation after YPG militants withdrew from a border strip inside Syria.

How Does Egg Freezing Work

If it seems like a ton of people have been freezing their eggs lately, you’re on to something. The NYU Langone Fertility Center, where I