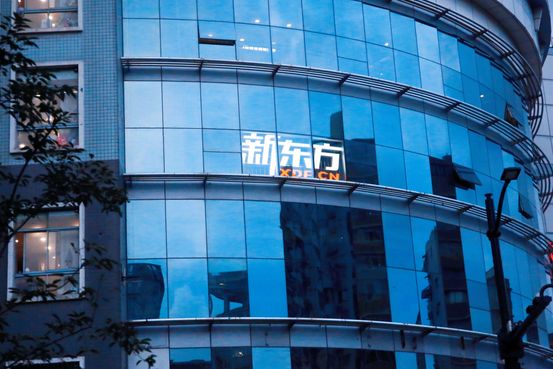 Mr. Yu, who is also known as Minhong Yu, added in his

post that the company’s operating income plunged by 80% without specifying the relevant period for the plunge.

For the fiscal year ended May 31, 2021, New Oriental reported that operating income dropped 71% year-over-year to $117 million, on revenue of about $4.28 billion. The company hasn’t reported any more recent financial figures.

Despite the layoffs, roughly 50,000 employees and teachers remain with the company, Mr. Yu said in another post on Monday. He added that he had been advised to shut the company down. “But that is an impossible thing. [I] cannot accept that emotionally, and it is not practical in reality,” he wrote.

In July, China’s government issued tough new rules on tutoring for students in the compulsory nine years of education. The rules, aimed at reducing the financial burdens of parenthood, say tutoring services covering school subjects in those years can operate only on a not-for-profit basis.

Shares in China’s big tutoring companies have fallen steeply. By the end of 2021, New Oriental was worth about 89% less than a year earlier, according to FactSet. Its market capitalization is currently about $3 billion. Competitors

In November, New Oriental said it would stop offering tutoring for school subjects to students from kindergarten through grade nine, which is the last year of compulsory education in China, by the end of 2021. The company added that the halt would have a “substantial adverse impact” on its future revenue as these tutoring services accounted for roughly 60% of its total revenue in its 2021 fiscal year.

New Oriental had a little more than 88,000 full-time employees and 17,000 contract teachers and staff by May 2021, according to its latest annual report.

The company had previously said it would lay off more than 40,000 staff by the end of 2021. Tutoring is one of several businesses where Chinese regulatory clampdowns have led to hefty job cuts, alongside the technology and property sectors.

In his Saturday post, Mr. Yu also offered some future directions for New Oriental, saying that it would expand into areas including selling farm goods via live-streaming channels and book promotion. It would also invest more money into tutoring for university students, and into teaching the Chinese language overseas.

At the end of December, Mr. Yu hosted his first live-streamed event selling farm goods, on the Chinese video-sharing app Douyin. The company also launched its own live-streaming e-commerce platform on the same day.

Many agricultural companies and local governments have approached the company in the past days, hoping to collaborate, Mr. Yu said in his weekend social media post. The company has established a team to select what farming products to promote, he added.

New Oriental hosted a dinner for employees after a two-day annual report meeting, Mr. Yu wrote. He said that to cut costs, he ordered food from an ordinary restaurant and downgraded from “good alcoholic drinks” to ordinary white and red wine.