Some Big Companies Have Plenty of Covid-19 Tests for Employees. Others Aren’t So Lucky. 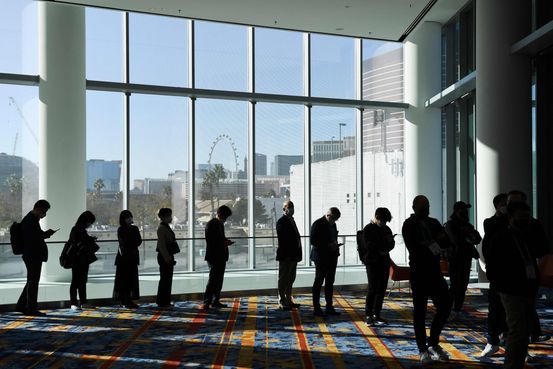 The Omicron variant has highlighted a testing divide in American business, where some big companies have secured ample Covid-19 tests and kept workers coming in, while others have struck out and let workers stay home.

Google, many full-time employees can regularly test themselves or their dependents at home on machines that give results within minutes.

plans to soon roll out an at-home device for employees to test themselves before coming into an office or attending a company gathering. Meanwhile, industrial giant

has supplied employees who are using its offices with at-home rapid tests that they can take daily, part of what Chief Executive

calls a “belt and suspenders” approach to safety.

“Testing is the key,” Salesforce Co-CEO

The challenge is procuring such tests. As Covid-19 cases have skyrocketed, many Americans have had difficulties getting a rapid test kit or securing an appointment for a laboratory test. Some people have waited a week to get PCR results amid a nationwide testing backlog.

The high cost and lack of availability of tests have left many companies searching for alternatives, executives and corporate health advisers say. The Biden administration plans to begin distributing 500 million rapid tests to the public free of charge in the coming weeks, and on Thursday President Biden said he is directing his administration to procure an additional 500 million such tests. Private insurers will also have to cover the cost of over-the-counter Covid-19 tests starting Saturday.

told U.S. employees last month that it would make attendance at its corporate and regional sales offices voluntary until the end of January, in part because of a lack of at-home rapid tests. The brewer had called its U.S. corporate employees back to its offices in October. Molson is now requiring those employees to get Covid-19 booster shots.

chief people and diversity officer at Molson, wrote in a note to staff that “the nationwide shortage of at-home Covid-19 rapid test kits, especially amid the current national spike, present new challenges and leave us with very few reasonable paths forward in the short-term.”

Many companies had planned on robust testing, along with vaccination requirements, as a centerpiece of strategies to bring workers together in the new year. Executives believed frequent testing could reduce transmission of the virus in the workplace, said

“Without that testing available, now that’s a big piece of your dashboard that is simply missing around how much Covid is in your workforce,” Dr. Mills said. The thinking among many employers: “How can you expect employees to come back if you can’t do reliable testing?” Dr. Mills said.

Some large-company executives say the federal government needs to work with states to set up more mass-testing clinics, similar to mass-vaccination sites. These executives say it won’t be tenable for businesses to compete with each other to procure testing supplies in the coming weeks, according to a person familiar with their thinking. The Biden administration’s vaccine or testing mandate, which has been challenged in courts but is set to go into full effect next month, requires unvaccinated workers at companies with 100 or more employees to test weekly.

Get a morning briefing about the coronavirus pandemic three times a week and a weekly Health newsletter when the crisis abates.

used by Google and others. The company says its at-home molecular tests provide results within 20 minutes; Cue has said it provides results with accuracy similar to that of a PCR test. The company sells its reader, including 10 test cartridges, to consumers for roughly $950, though pricing for companies will vary based on the volume of orders and other factors, said Cue Chief Executive

Mr. Khattak said the way employers use the Cue machines ranges by workplace, with some manufacturers and other companies testing employees on site, and some sending them directly to employees’ homes.

Within Google, the Cue machine has raised concerns among workers about unequal access to healthcare. Though Google’s full-time employees can request the device at no cost, the company provides contractors and others with access to PCR tests that must be mailed in or done on-site at a Google facility, according to a statement from the Alphabet Workers Union, which formed during the pandemic to organize workers at the company.

A Google spokeswoman said the company’s on-site Cue testing program is also available to Google’s broader workforce at its data centers. “We have many at-home and in-person viral testing options available free to our employees and members of our extended workforce, including temps and vendors,” she said in a statement.

Salesforce’s Mr. Benioff said he hopes the company will soon have an at-home Covid testing device at scale. A Salesforce spokeswoman declined to comment further on the device.

Mr. Benioff said Salesforce currently uses antigen or PCR tests. Employees will decide how they want to be tested when at-home devices are available, he added.

What are the testing protocols at your place of work? Join the conversation below.

“Some people do not want to be tested through a device that’s connected to a network, we agree; we think people should have a choice” when Salesforce rolls out the devices, he said. “We do want to know that somebody does not have the virus before they come into our event or our office, that’s all.”

, say they have been successful in procuring tests by buying them up early. The bank has on-site medical personnel at its office in New York, to assist with testing, and has a supply of rapid antigen tests to use at its offices and other locations, such as bank branches. The company plans to test workers returning to its New York office in the coming weeks.

Bank of America’s CEO, said in an interview that the company was doing a lot of testing to try to keep the workplace safe.

“We’ve got all these employees, we want to make sure they feel comfortable working,” Mr. Moynihan said. “We believe screening is critical to what we do.”

—Emily Glazer and Jennifer Maloney contributed to this article.