Those gumball-pink walls. That Sunkist-orange colorblocking. Those shimmery plastic beads. You don’t even need the instantly iconic floral oilcloth tablecloths or the poster of Cindy Crawford to recognize the aesthetic that has become as much a part of Night + Market’s brand as the fried chicken sandwich or the cult French wines or the pastrami pad kee mao.

As a longtime food critic, I haven’t paid much attention to the import of restaurant design. I can appreciate the giddy grandeur of a room like Daniel in New York City, or the dreamy carved-from-the-jungle magic of the Noma pop-up in Tulum, Mexico, or the time-warp vintage beauty of Musso & Frank in Hollywood. But those are outliers: Most restaurants look like restaurants. Maybe they’re modern, maybe they have a ton of plants, maybe the materials make for a particularly soft or harsh experience. I know that color and lighting and the like can point to specific price points and types of cuisine. But unlike the food, it’s not something I instinctively think about. I force myself to think about it, to describe it, to consider its impact, but only for the sake of readers who care more than I do.

But there’s something about the look and feel of Night + Market Song in Silver Lake, Los Angeles, that felt vital, even to this design curmudgeon, from the moment I first set foot in the place when it opened in 2014. The way Night + Market looked went beyond the considerations of traditional restaurant design. There was a subversive quality to its gaudy colorblocked vibrance, its teen bedroom insistence on conveying an actual personality — a human life with multifaceted influences. It revealed far more about the person responsible — chef and owner Kris Yenbamroong — than just what he thought a restaurant should look like. “It’s not really the way a restaurant is supposed to look,” Yenbamroong says.

Much like his food, the design of Song felt like Yenbamroong daring people to try to put him in a box and then rejecting that box. As a professional observer of food culture, I was more excited by that rejection than even the most well-considered or flamboyant design. And yet, it’s not an aesthetic that was conjured by a design firm or really thought out in any formal way.

In 2014, America was deep in the throes of a food revolution. Chefs everywhere were finally cooking exactly what they wanted to eat rather than what they thought they were supposed to cook, or what traditionally had sold well, or what was expected. It was a revolution led by chefs like David Chang in New York, by restaurants like Animal in Los Angeles. But even though the soundtracks in those restaurants often mimicked the “this is what we like, deal with it” ethos of the menus — the music was loud and fun and often countercultural — the restaurants themselves looked like, well, restaurants. Sometimes they were sparse in a way that might be considered daring, but unlike the food and the music, the design of these places rarely conveyed much other than a rejection of the stuffiness (and tablecloths) of the fine dining of the past. It was different, yes, but it didn’t offer much in the way of newness or give me anything to grab hold of as a signifier of forward motion.

Night + Market Song was the first restaurant I encountered that took that “I do what I want” ethos and fully applied it to design. Stepping into the place felt like entering someone else’s vividly colored consciousness. It has often been compared to a teenager’s bedroom, mainly because of the Cindy Crawford poster, but that comparison works for me for a different reason. Do you remember the first time you entered the bedroom of a new friend in high school, someone who had worked hard to create an almost theatrical space for themselves — maybe it was incense and posters, maybe it was crushed velvet curtains, maybe it just exuded weed and sex — and you knew immediately that you had just glimpsed into the psyche of that person and liked them even more? Night + Market Song was like that for me. That the food backed up this raucous, cross-cultural explosion of personality only added to the effect.

Yenbamroong’s background as a photographer and all-round art nerd helped make for a restaurant that was as visually stimulating as it was stimulating to the palate, but its design was also the result of multiple cultural influences — it came from a Thai kid who grew up in LA, who had snippets of Thailand etched into his mind from an early age but who also loved American pop culture, who spent time in London and New York, and who felt he had nothing to prove to anyone in terms of the authenticity of his own food or experiences.

“Even the idea that it was designed is a little off,” Yenbamroong says. “I mean, I guess you could say it was a design process, but it’s more like sitting on a couch in your therapist’s office and stuff just coming out.” 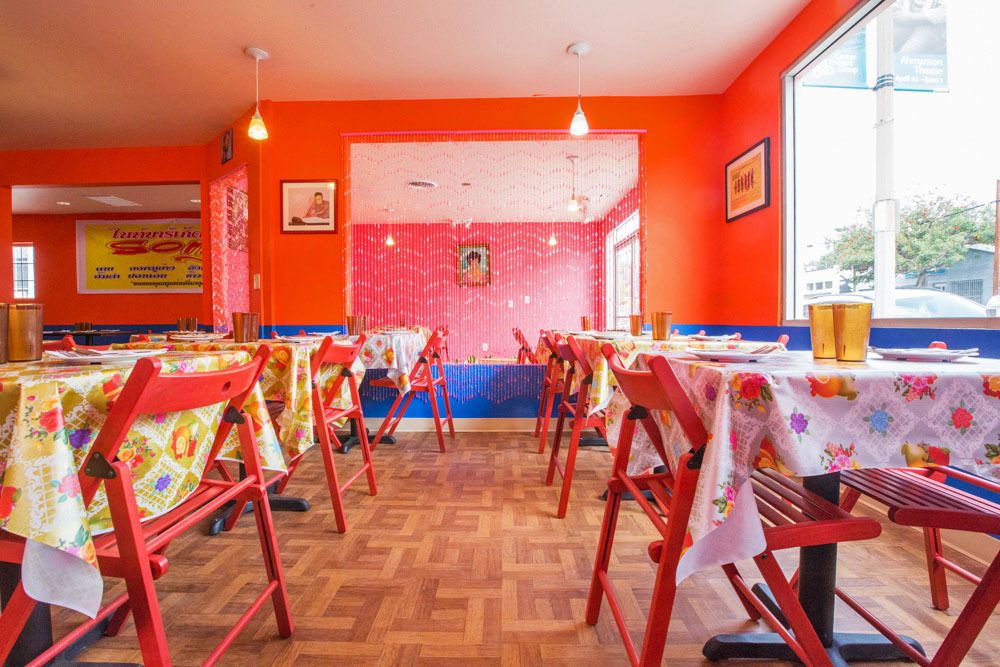 Yenbamroong and his partner (and now wife) Sarah St. Lifer painted the place themselves. The colorblocking was an idea that Yenbamroong had encountered on a photo shoot years earlier in a kitchen in New York City that had been painted in a French style with wide swaths of white and blue. He wondered what that might look like if he used the vibrant colors seen in Thai advertisements and billboards.

“I spent a good chunk of my formative years in Thailand, but I wasn’t trying to create something from there,” Yenbamroong says. “Or maybe I was, but more like my memory of it rather than the real thing. When you experience something when you’re younger, it’s not rigorous or academic. You touch it and feel it and then you go away from it and don’t see it for a while, you have some skewed hazy memory of it. It was the colors, and how when you walk around, the advertisements look a certain way.”

The fit-out was also done with whatever materials they could afford, which wasn’t much. “It wasn’t like, how should I do it?” he says. “It was more like, what can I cobble together?”

Were the chairs comfortable? Was it a pleasant place to dine? Not really, but it barely mattered. You always had to wait for a table, and the atmosphere was always on the verge of chaos. It felt like a party. The community and the restaurant kind of blended together. If you wanted an accurate picture of the soul of Silver Lake in the mid-2010s, Night + Market Song was a good place to start.

Song was Yenbamroong’s second restaurant, but even so — partially because of its design — he thinks of it as the flagship. “That’s kind of the one that has come to define what a Night + Market restaurant looks like,” he says. “It’s also the one that maybe provides inspiration for people. People send me photos of places around the world that look like it.”

Garrett Snyder, who was the first food writer to cover the original Night + Market and co-wrote the Night + Market cookbook, says that Song is the place where Yenbamroong came into his own. “He had become much more confident in his personal aesthetic,” Snyder says. “He knew what he wanted to evoke in a way that he didn’t when he first started. He didn’t feel the need to explain the ‘Thai-ness’ of what he was doing. At that time, there were still observers who saw Night + Market as this attempt at obscure hyper-regional authenticity instead of being a uniquely personal expression. Song really cemented that he was doing something different. It’s that confidence in his own taste and sensibility that defines him most as a chef and artist.”

Several years after Song’s debut, in a different city — and now a husband and father — Yenbamroong’s experience designing the newest Night + Market restaurant has been vastly different. “It was like, in your wildest fantasy, what do you want it to be?” he says. “It wasn’t like I had an unlimited amount of money… but it was a lot of money. And it wasn’t my money.” For Night + Market Vegas in Virgin Casino, Yenbamroong worked with Ashley Justman from Avenue Interior Design. Rather than try to re-create a carbon copy Night + Market restaurant, they amplified the glam of Vegas while also reviving some ideas that Yenbamroong had originally had in mind for the Venice, California, restaurant that opened in 2018. “When we opened the restaurant in Venice, I had this idea that it be kind of cocaine Thai,” Yenbamroong says. “Not that I want people doing drugs in the restaurant, but I felt that there was a lack of fun and excess at that time.” In the end, that inspiration made its way into the over-the-top restaurant in Vegas, which has a chrome ceiling and a wall of disco balls. “Every one of my restaurants has one disco ball,” Yenbamroong says. “Vegas has like 50 disco balls.”

Talking to him about it, I get that sense again that he’s daring people to try to keep him in some kind of box. The kid who started his first restaurant as a bizarre art project, who painted his second restaurant himself, is now a man in his late 30s with a wife and child, and if he wants a Vegas restaurant with a chrome ceiling stuffed full of disco balls, who says he shouldn’t do that, too? If all restaurant design was like that — if it truly represented the different eras and obsessions and cultures of the human behind the business — well, maybe I’d be much more interested in restaurant design.

Despite the collaboration and inflated budget and extreme fun of the Vegas project, Yenbamroong’s heart is still with Song. “At the end of the day, if I just had one restaurant, if I just had Song again, and I’m like 40 years old, and I just had my wife and kids, and I could just run Song and, like, actually be in the kitchen? A lot? I’d be happy with that.

We all grow up and leave our teenage bedrooms behind. We don’t design our houses or restaurants as if they are supposed to tell the world something about our souls; we are more caught up in trends and good taste and showcasing our levels of wealth and consumerism. But money can’t buy the kind of brilliance exhibited in an arty kid’s bedroom, and it probably can’t buy the level of freshness and originality and fun that Yenbamroong came up with back when Song opened. That, likely, is exactly what makes it so special.