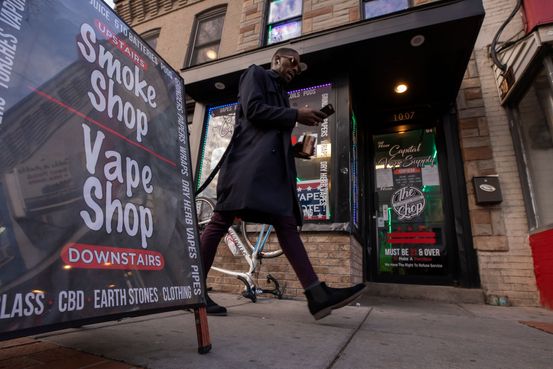 Fruity, disposable e-cigarettes remain popular among middle- and high-school students, according to new federal data. And the most commonly used brand—Puff Bar—is one that has remained on the market despite an order by the Food and Drug Administration last year to halt its U.S. sales.

About 11% of U.S. high-school students—an estimated 1.7 million children—said they had used e-cigarettes at least once in the past 30 days. The data are based on a national survey conducted online between Jan. 18 and March 21.

Last year, about 20% of U.S. high-school students, or about 3 million, said they had used e-cigarettes at least once in the past 30 days. The annual study is conducted by the FDA and the U.S. Centers for Disease Control and Prevention, which said changes in methodology this year because of the pandemic made it difficult to compare with prior years.

The most commonly used flavors among young people were fruit, candy and desserts, mint and menthol, according to the survey. More than half of young e-cigarette users said they used disposable devices. Some 26% of high-school vapers said they used disposable brand Puff Bar, which was followed in popularity by Reynolds American Inc.’s refillable Vuse brand with 11%, Smok with 10% and Juul with 6%. Among middle-school e-cigarette users, 30% reported that their usual brand was Puff Bar.

Puff Bar’s sales jumped in early 2020 when federal restrictions barred the sale of sweet and fruity e-cigarette refill pods like those of industry leader Juul Labs Inc. Because Puff Bar devices couldn’t be refilled, the FDA’s initial flavor restrictions didn’t apply to them. Underage vaping dropped after those restrictions were implemented, but disposable e-cigarette use among children and teens jumped.

In July of last year, the FDA ordered the company to halt its sales, saying its products hadn’t been authorized by the agency.

The brand stopped sales on its website but continued selling in retail stores with flavors such as Watermelon, Blue Razz and Lemon Ice. Puff Bar resumed sales on its website in February of this year, saying it had changed its ingredients and now used nicotine that wasn’t derived from tobacco. The change may allow it to sidestep the FDA. An agency spokeswoman didn’t immediately comment Thursday on Puff Bar’s continued popularity among children. The FDA previously said it couldn’t comment on an open investigation.

It isn’t clear who owns the brand. Puff Bar didn’t immediately respond to an emailed request for comment.

Health officials said a significant number of young people vaped this year despite the fact that many were learning remotely and might have had less access to e-cigarettes from friends or classmates. Some 2.8% of middle-school students, or an estimated 320,000, reported e-cigarette use in the past 30 days.

“These data highlight the fact that flavored e-cigarettes are still extremely popular with kids,” said

director of the FDA’s Center for Tobacco Products.

The results could inform the FDA’s pending decisions on which e-cigarette products it will allow to remain on the U.S. market. Some lawmakers and public-health groups have called on the agency to ban all e-cigarette flavors other than tobacco.

Among the FDA’s decisions so far, the agency has ordered off the market more than a million flavored products—including vaping liquids with flavors such as apple crumble, cola and cinnamon toast cereal—saying the manufacturers hadn’t provided sufficient evidence that their products benefited adult smokers to an extent that outweighed their potential appeal to young people.