Navajo Nation President Jonathan Nez has his temperature taken to check for coronavirus symptoms in May. 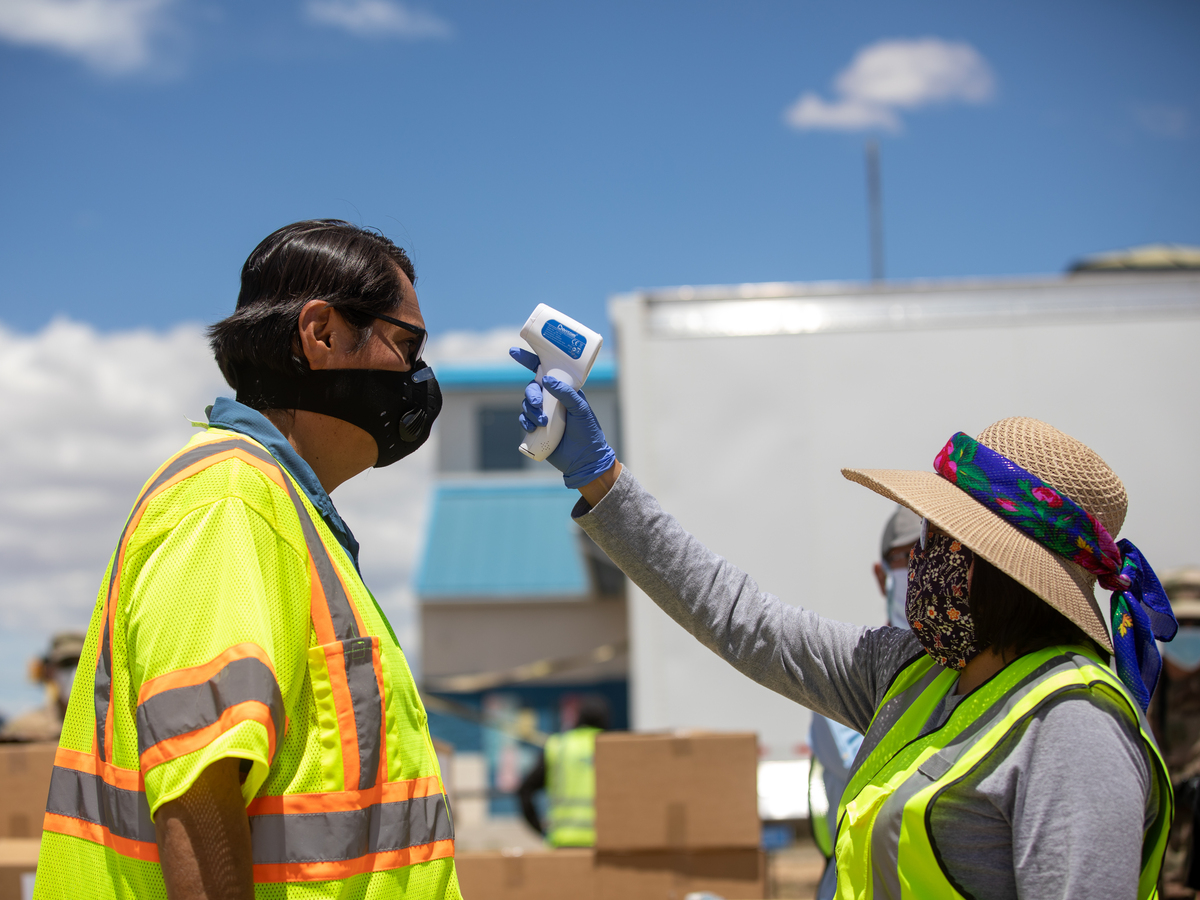 Navajo Nation President Jonathan Nez has his temperature taken to check for coronavirus symptoms in May.

The Navajo Nation experienced its first wave of the coronavirus in May 2020. Like other American communities, its success in containing the virus has been mixed, with the latest advisory from the Nation’s government warning of “uncontrolled spread” in 34 Navajo communities.

“We took our ability to govern ourselves seriously as a sovereign nation,” Navajo Nation President Jonathan Nez told NPR, regarding the early steps to keep people save from the coronavirus.

Officials implemented strict guidelines, including mask and social distancing mandates, as well as a limit on the number of visitors in businesses. Far more stringent, the Navajo Nation enforced weekend-long lockdowns, closing all businesses and roads to the public every Friday evening through Monday morning.

“We went as far as to say no non-Navajo visitors — they could pass through, of course, but they couldn’t visit,” Nez said.

The Navajo Nation is encompassed by Arizona, Colorado, New Mexico and Utah. The Navajo had put into place a mask mandate mid-April, but Arizona still doesn’t have a state-wide mask mandate and Utah’s ordinance went into place just this week. Nez said this became a problem for the Navajo citizens, and as time wore on, spirits wore down.

“We are seeing instances of the same fatigue that are happening in this country. Before, there was an element of fear that kept people home,” Nez explained. “This is changing as we go further and further into this pandemic­­­. That’s why we are changing up our strategies and fighting this virus.”

Wednesday, the Navajo Nation warned residents about a rise in cases in the surrounding areas.

“On Tuesday, the state of New Mexico reported 1,266 new cases of COVID-19, the state of Arizona reported 3,434 new cases, and Utah reported 2,517,” Vice President Myron Lizer said in a news release. “The safest place to be is at home on the Navajo Nation. We have to remain optimistic and never lose hope because eventually we will overcome this pandemic.”

With stores closed over the weekends, citizens had begun traveling to conduct their weekend business. Nez said the Navajo Nation bubble was compromised by citizens bringing the virus back from neighboring states.

With fatigue and complacency settling in, the Navajo Department of Health eased up on weekend regulations. In October the Navajo were allowed to access essential businesses, with limited hours, over the weekends in hopes of deterring off-nation travel.

Only about half of the Navajo population reside on the reservation. With cases starting to climb again for the first time since spring, Nez is worried about the upcoming holiday season.

Family and social gatherings are driving the spread throughout the reservation, Nez said. He is encouraging family and friends to stay home, on and off the reservation alike, until a vaccine comes out. It is up to the younger population, he said, to do what is right to protect not only themselves, but their elders as well.

“We framed this virus and compared it to monsters that have plagued our people, in our creation stories, our traditional stories. The Navajo people have fought monsters throughout time; that’s our view and our perspective.” Nez explained. “Today, we are fighting modern day monsters. Now we have a new monster, COVID-19.”

PrevPreviousRestaurants, gyms, hotels are high-risk areas for spreading the coronavirus, model suggests
NextExercise and Migraines: What Helps and HurtsNext

Already watched Sex, Love & goop on Netflix? Still thinking about the brave and vulnerable and wonderful participants in the series? Wondering what they’re up