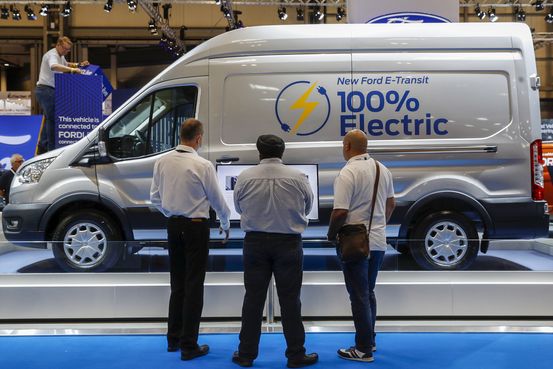 on Monday offered a $2.5 billion unsecured green bond to investors, a first for the car maker that comes days after it launched its sustainable-financing framework and said it would buy back higher-priced debt.

Dearborn, Mich.-based Ford said it would allocate the proceeds from the bond offering, which has a 3.25% coupon and comes due in 2032, to fund investment in its growing battery electric vehicle portfolio, including the Mach-E, F-150 Lightning and E-Transit models. The company marketed the bond to existing as well as new investors.

The Morning Ledger provides daily news and insights on corporate finance from the CFO Journal team.

Ford is following the example set by many other U.S. companies that have stepped up sales of green bonds this year. Corporate green bonds marketed in the U.S. have raised $58.6 billion in proceeds in 90 offerings so far this year, more than double the total from a year ago when green-bond issuance totaled $28.7 billion in the U.S., according to Refinitiv, a data provider. During the same period in 2019, green-bond issuance totaled $22.4 billion.

which was issued in September.

Ford on Thursday said its sustainable-financing framework would serve as the basis for issuances of both secured and unsecured financing tools, including bonds tied to the company’s environmental, social and governance goals, like clean transportation and clean manufacturing. The auto manufacturer said it wants to be carbon neutral no later than 2050.

“We’re putting our money where our mouth is…and directing capital to what’s good for the planet,” Chief Financial Officer

said last week, adding that the proceeds from a green-bond sale could be tied to the company’s plans to spend $30 billion on electric vehicles by 2025. Ford declined to make Mr. Lawler available for an interview on Monday.

Ford also eliminated its dividend at the time. It said last month it would reinstate its dividend in the fourth quarter, pledging to distribute 10 cents a share as of Dec. 1.

“There is a lot of interest in green bonds, especially on the investor side,” said

a senior partner at Tigress Financial Partners LLC, an investment bank. “Many companies are tapping into a market where there is a lot of demand.”

Ford’s green bond fits with the company’s emphasis this year on debt financing tied to environmental goals and its transition to zero-emission vehicles, said

A federal judge issued a preliminary injunction on Tuesday to halt the start of President Biden’s national vaccine mandate for health care workers, which had

Everything to Know About the HBO Series

Vacation time! HBO’s White Lotus will return for season 2 in 2022 — but the dark comedy will look and feel a bit different than