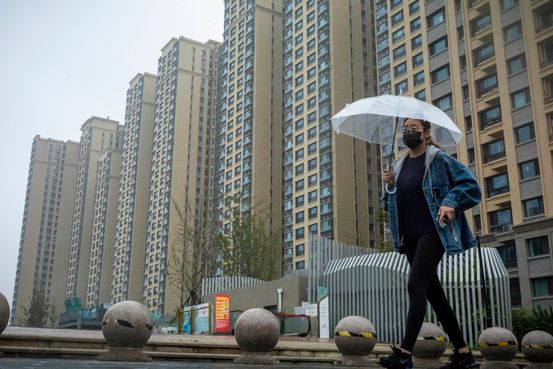 stake in a commercial bank for $1.5 billion, the latest sign that the country’s authorities are trying to help the property giant resolve some of its financial troubles.

, which is based the Liaoning province city of Shenyang, to a company whose owners include the local branch of China’s State-Owned Assets Supervision and Administration Commission as well as the local and provincial governments. The transaction would make the state-owned company the bank’s largest shareholder.

Evergrande holds 34.5% of the Hong Kong-listed regional lender, which it invested in five years ago. Its stake would drop to 14.6% following the deal, which needs regulatory approval. It said the sale was valued at about 9.99 billion yuan, the equivalent of about $1.55 billion.

Shengjing Bank has also demanded that Evergrande use net proceeds from the stake sale to repay what the developer owes it, according to a regulatory filing.

The real-estate conglomerate’s stock jumped 10% by noon in Hong Kong but remains down more than 80% for the year.

Evergrande, the world’s most indebted property developer, has struggled in recent months to raise cash and meet its financial obligations after borrowing heavily from large and small investors, banks, suppliers and home buyers who paid in advance for apartments that the company promised to build. It reported the equivalent of $304 billion in liabilities at the end of June, including $88.5 billion in interest-bearing debt.

Last week, the company missed a coupon payment on its U.S. dollar bonds, and it has another interest payment coming due Wednesday.

Construction of many of Evergrande’s developments has been halted and the company has been paying some suppliers and contractors with unfinished apartment units.

Evergrande said in a regulatory filing Wednesday that “its liquidity issue has adversely affected Shengjing Bank in a material way” and that the purchase of most of its stake by a state-owned enterprise would help stabilize the lender’s operations.

The local government had little choice but to help Evergrande resolve its liabilities with the bank, said Li Gen, chief executive of Beijing BG Capital Management Ltd., a credit-focused asset manager. If the state-owned enterprise hadn’t stepped in to buy some of Evergrande’s stake, Shengjing Bank would likely have to book significant loan losses, which could affect its lending to other businesses.

Shengjing Bank’s net profit after tax fell 77% last year to the equivalent of about $191 million, according to the lender’s regulatory filings. This year, its first-half net profit after tax dropped 63% to $162 million, as the bank’s interest margins shrank and it increased its expectations for loan losses during the Covid-19 pandemic.

The 24-year-old bank, whose business is mostly in northern and northeastern China, has 18 branches in five provinces and dozens of subbranches in cities including Beijing, Shanghai and Tianjin, according to its interim report. It provides deposit and lending services to individuals and companies, and has in the past lent money to Evergrande, its regulatory filings showed.

previously worked as an executive vice president at Evergrande, as did the bank’s chief approval officer. Its board also has other Evergrande representatives who were appointed after the developer became its controlling shareholder.

Around 18.2% of Shengjing’s outstanding loans at the end of last year were to the real-estate and construction industries, versus 12.8% in 2018, according to the bank’s disclosures. The rating company said Shengjing’s exposure to one group of companies—which it didn’t name—exceeded a regulatory limit.

Evergrande has been trying to sell other assets, including stakes in an electric-vehicle business and a property-management-services firm, as well as an office building in Hong Kong.

“We think that this disposal will help Evergrande address some of its upcoming liabilities, primarily those owed to Shengjing Bank, but will not be sufficient (to) fully address the company’s tight liquidity position,” analysts from CreditSights said in a report.

—P.R. Venkat contributed to this article.