Dollar Tree to Sell More Items Above $1 as Costs Rise 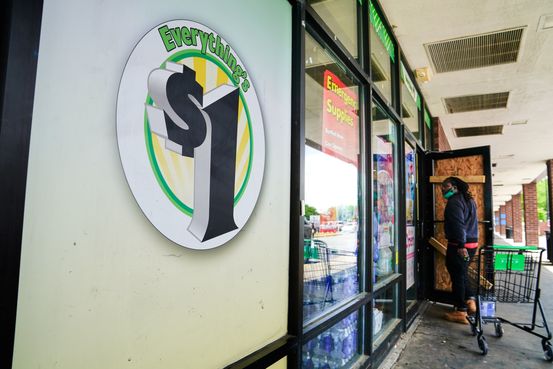 which sells nearly everything for a dollar in its namesake chain, plans to add more products at slightly higher prices, highlighting the pressure on companies to offset cost increases for a wide range of goods.

The retailer said it would start selling products at $1.25 and $1.50 or other prices slightly above $1 in some of its stores, expanding current tests selling items at higher price points as supply-chain snarls, a tight labor market and inflation push costs higher.

The discounter has experimented with selling items for $3 and $5 since 2019 in a shelf section labeled Dollar Tree Plus. Those tests continue in a few hundred of its roughly 7,900 Dollar Tree stores.

The addition of more above-$1 items is a response to rising costs and positive consumer feedback on tests so far,

chief executive of Dollar Tree, said in an interview. With the above-$1 price point, Dollar Tree will be able to offer new products such as more frozen meat or seasonal items, said Mr. Witynski. That could encourage shoppers to spend more per trip, he said.

“We recognize the need to make adjustments in the current economic environment,” he said, including “the pressure all of us are seeing on wages, freight and on our suppliers and cost increases.”

All stores with Dollar Tree Plus sections will get products at the above-$1 price points, as well as some legacy stores without the special section, said a company spokesman. He said over 100 legacy stores will carry the products.

Dollar Tree is in a unique position because of its pricing model, but navigating a nearly universal problem for businesses around the world.

Makers of products from diapers to cars face higher costs for materials, transportation and workers. In many cases, manufactures and retailers are raising prices, but some are divided over whether to pass along these costs to shoppers. Some are betting inflation is a passing challenge or that consumers lack the appetite to absorb price increases. Many companies are working to negotiate with their suppliers further to shoulder more of the financial burden.

In recent months, supply-chain slowdowns have fueled a larger and longer-lasting surge in inflation than government officials anticipated, adding to pressure on holdouts to raise consumer prices.

For years some investors have clamored for Dollar Tree to boost profits by untethering itself from the $1 price point established when the company was founded in 1986. Many former and current executives see it as sacrosanct, a key reason shoppers gravitate to the store and the linchpin of simplified operating model that increases profits.

In 2019, hedge fund Starboard Value LP dropped a planned proxy fight at Dollar Tree after the retailer showed openness to implementing some of the changes the hedge fund sought, which included testing higher price points to boost profits. This year, as prices rise for many products, calls from investors to “break the buck” have intensified.

As of Tuesday evening, Dollar Tree’s stock had fallen around 20% this year, while the S&P 500 was up around 16%. Competitor Dollar General Corp.’s stock has risen around 2% so far this year.

The Chesapeake, Va., company sells most products at $1 through its Dollar Tree stores. At its roughly 7,900 Family Dollar stores, the chain the company bought in 2015, products are sold at a range of prices.

In August, the company reduced its profit outlook for the full year, saying that rising supply chain and freight costs would eat into earnings. The company now estimates earnings per share of $5.40 to $5.60, down from a range of $5.80 to $6.05 the company forecast in May.

Early in the year, the company assumed that ocean carriers supplying the company with products would fulfill around 85% of their contractual commitments, Mr. Witynski said on an August call with analysts. Now the company expects about 60% of commitments to be fulfilled and at higher rates, he said. “Our products have lower price points than other retail importers and, as a result, our freight costs are a higher percentage of our gross merchandise margin,” he said. The company also faces labor shortages in warehouses and stores, he said.

In response, Dollar Tree has reserved dedicated space on chartered vessels for the first time and is adding manufacturing sources that don’t rely on trans-Pacific shipping, said Mr. Witynski. It also is ordering some products earlier, he said. It has increased pay in some locations and is offering sign-on bonuses and hosting hiring events, he said.

In August, the company reported weak sales at its Dollar Tree chain, with comparable sales—those from stores or digital channels operating for at least 12 months—down 0.2% in the quarter ended July 31. Sales at its Family Dollar stores fell 2.1% after a strong pandemic-related sales surge during the same period last year.

The company’s merchants, who historically aim to buy products for around 43 cents, will also be able to work with suppliers to source slightly higher-priced items, said Mr. Witynski.

“These price points will bring a meaningful assortment that over time will have a positive impact on our performance,” he said.