Conagra, PepsiCo and Other Food Makers Grapple With Higher Costs 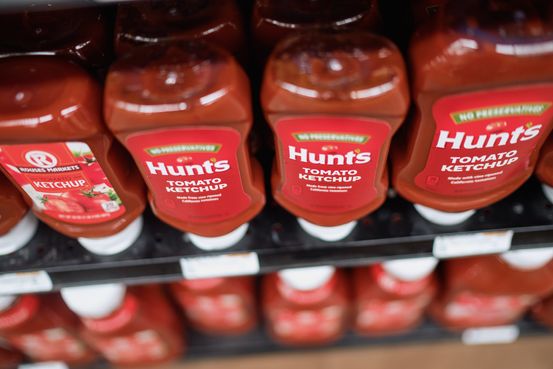 Major food companies are boosting prices as they contend with escalating costs, and labor and transportation problems that are hampering the flow of staples to grocery-store shelves.

Makers of goods from french fries to meat snacks are working to secure trucks and staff processing lines, executives said, as costs for products as diverse as packaging and cooking oil rise. Companies including

are raising prices to keep up, they said, while striving to keep products in stores.

Supply-chain problems are growing for U.S. food makers at a time consumers are spending heavily on food, in supermarkets and restaurants. Consumer spending at grocery stores was 4% higher in August than in the same month a year earlier, according to U.S. Census Bureau data. Restaurant sales have climbed this year as Covid-19 restrictions ease, though concerns over the Delta variant have eroded some of the rebound in recent weeks.

Conagra, which produces Slim Jim meat sticks, Pam cooking spray and Hunt’s ketchup, on Thursday raised its inflation projection for the year, while reporting that its quarterly profit fell 29% to $235.4 million. Executives said the Chicago-based company in recent months has faced higher costs for meat, grains and steel cans, as well as labor and transportation challenges. The company’s overall sales fell 1% to $2.65 billion from $2.68 billion for the quarter ended Aug. 29, a better result than the expectations of analysts polled by FactSet.

said the company is trying to respond to stronger-than-expected demand as consumers continue working remotely, watching movies from home, and cooking their own meals more than they did before the pandemic.

“This is a great problem to have, but it increases the demands on our supply chain,” Mr. Connolly said. “It’s a daily grind.”

Lamb Weston, the top North American seller of frozen potato products, separately said Thursday that its quarterly profit fell by two-thirds to $30 million for the quarter ended Aug. 29, pressured by what the Idaho-based company called rapidly increasing transport costs, scarce labor and other disruptions, including intense summer heat that damaged potato crops in the U.S. Pacific Northwest. The company said it will increase prices to offset rising costs, and alter production and staffing schedules to help attract and retain more workers.

Food prices are climbing around the world, as growing consumer demand runs up against dry farm fields in North and South America that have constrained harvests, along with transport disruptions driven by the Covid-19 pandemic and damaging storms. The United Nations’ Food and Agriculture Organization said this week that its food price index, measuring costs of meat, grains, sugar and other commodities, climbed in September to the highest level in 10 years.

Supply-chain problems are challenging other top U.S. food makers. PepsiCo said earlier this week that it faces higher costs for aluminum cans, plastic bottles, labor and trucking, though the company boosted its profit expectations for the year because of rising sales of Mountain Dew, Doritos and other snacks.

Gatorade drinkers in Pennsylvania, New York, Massachusetts and elsewhere report finding the sports drink scarce on store shelves. PepsiCo officials this week said they had been scrambling amid a shortage of plastic bottles for the company’s Gatorade drinks. A spokesman declined to say how much of its production was affected.

said last month that the Cheerios and Betty Crocker parent is dealing with hundreds of operational disruptions—such as more-expensive ingredients and a shortage of truck drivers—that are pushing up costs for supermarket customers.

To keep pace with demand, Mr. Connolly said Conagra is aggressively recruiting workers and trying to ensure they stay healthy. The company also is striving to maintain the best relations possible with its employees, he said, during a time when workers at other big food companies such as

have gone on strike during contract negotiations to protest what they see as unfair demands by employers.

Conagra is also maintaining pressure on material and ingredient suppliers and establishing contingency plans to deal with shortages, such as potentially swapping in different ingredients or finding secondary suppliers, Mr. Connolly said.

“We’re looking for alternate solutions even if they come at a higher cost,” Mr. Connolly said in an interview.

Strong demand and supply challenges mean Conagra hasn’t been able to deliver on customer orders as fully as the company would like, executives said, though they added that they are able to fill nearly all orders. The company has said that demand for its Hunt’s products has been unprecedented, and that availability of some items would be low until it can process more tomatoes from this year’s harvest.

Conagra said Thursday it expects gross inflation—which doesn’t take into account hedging—to be about 11% for fiscal 2022, versus its earlier estimate of 9%. The company plans to continue adjusting prices and cutting costs, and said its prices likely will rise 4% or more during the current fiscal year.

Executives said they expect ongoing strong demand, price increases and cost-cutting measures to offset the higher costs. So far shoppers are largely sticking with Conagra’s brands despite higher costs, they said, though the bulk of the company’s price increases have only recently begun to show up on U.S. supermarket shelves.

Mr. Connolly said Conagra also might reduce promotions on some items to keep demand in check and avoid exacerbating supply challenges. “We don’t need to fan the flames,” he said.

—Dave Sebastian contributed to this article.