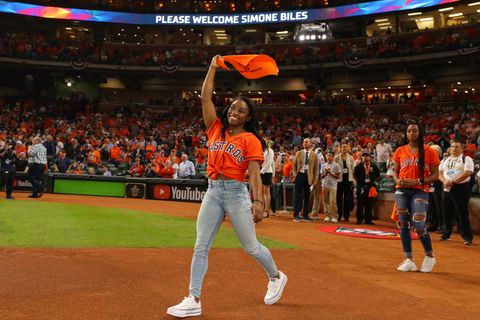 Mere weeks after becoming the most decorated gymnast in all of history ever—male or female—Simone Biles was not content to lie low and revel in her success. Instead she stopped by Game 2 of the World Series in Houston on October 23 to throw out a groundbreaking first pitch.

In the clip, Biles completes a back flip and a twist before ever even tossing the ball in Houston Astros outfielder Jake Marisnick’s direction. The crowd loses their minds (as we all would) before the Olympic Gold medalist’s pitch seamlessly meets Marisnick’s glove. After catching the ball, the player signs it for Biles. (Shouldn’t he be the one asking for an autograph?)

The event was a family affair for Biles, who grew up in Texas. She shared a photo of her crew from the day, all donning Astros jersey with the name Biles printed on the back. “WORLD SERIES BBY ⚾️,” she captioned the group picture on Instagram.

TMZ points out that this isn’t the first time Biles has made us invest in a baseball game. She also threw out the first pitch at a 2016 Astros game, where she finessed a front flip and twist before tossing the ball.

Prior to Biles’ legendary pitch on Wednesday, she told NBC Sports that she was actually nervous. “Gymnastics is the only sport I’ve ever done, so when it comes to anything else, I’m literally terrified,” she said. “So, I get more nervous this stuff than competing, which is really weird. So, yeah, hopefully I don’t end up on celebrity fails.” One doesn’t get the impression that “fail” is in Biles’s vocabulary.