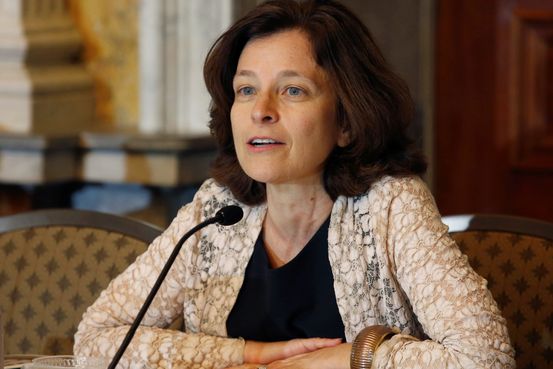 President Biden is considering Sarah Bloom Raskin for a top role at the Federal Reserve as part of a slate of three nominees for central bank board seats, according to people familiar with the matter.

The administration is eyeing Ms. Raskin, a former Fed governor and former Treasury Department official, to become the central bank’s vice chairwoman of supervision, the government’s most influential overseer of the American banking system, the people said.

Mr. Biden is also considering two economists for other Fed board seats that will soon be vacant: Lisa Cook, a professor of economics and international relations at Michigan State University; and Philip Jefferson, a professor and administrator at Davidson College in North Carolina.

Ms. Raskin’s nomination could mollify progressive Democrats, some of whom opposed Mr. Biden’s decision in November to offer a second term to Fed Chairman Jerome Powell, a Republican first chosen for the top job by former President Trump. They have called for the Fed to take a tougher stance in regulating big banks and a bolder approach in addressing financial risks posed by climate change.

Sen. Elizabeth Warren (D., Mass.) has signaled to the White House she would support either Ms. Raskin or Richard Cordray, the Consumer Financial Protection Bureau’s first confirmed director, who also has been under consideration for the Fed’s banking-regulator post.

The potential nominations of Ms. Cook and Mr. Jefferson, both Black economists, would help Mr. Biden achieve his promise to improve diversity atop the central bank, which in its 108-year history has had only three Black board members, all of them men. The most recent was former Fed Vice Chairman

The Fed’s seven-seat board of governors has one vacancy with two more looming. Governor Randal Quarles has said he would resign by the end of the month, and the term of Vice Chairman

ends next month. The White House’s slate of nominees for these three seats could still change before an official announcement is made, as soon as early January.

With a closely divided Senate, Mr. Biden needs either universal support of Democrats to confirm his nominees or support from some Republicans to overcome holdouts from his own party.

Ms. Raskin, an attorney, served in the Obama administration as deputy secretary at the Treasury Department from 2014 to 2017 and as a Fed governor from 2010 to 2014. She was confirmed by a voice vote in the Senate for both posts. Before that, she served as Maryland’s state commissioner of financial regulation.

At the Treasury, Ms. Raskin led efforts to address the financial stability risks of cybersecurity. At the Fed, she maintained a low profile on monetary policy and backed then-Chairman

Since leaving the government, Ms. Raskin has spoken out on the need for the Fed and other federal financial regulators to more proactively address growing threats from climate-related events such as natural disasters and wildfires.

“There is opportunity in pre-emptive, early and bold actions by federal economic policy makers looking to avoid catastrophe,” Ms. Raskin wrote in the foreword of a report last year from the Ceres Accelerator for Sustainable Markets, a climate advocacy group.

In a New York Times opinion article in May 2020, Ms. Raskin was critical of broad-based emergency-lending backstops enacted by the Treasury and Fed to assist businesses during the pandemic because she believed they should have taken steps to prevent lending to oil-and-gas concerns.

“The decisions the Fed makes on our behalf should build toward a stronger economy with more jobs in innovative industries — not prop up and enrich dying ones,” she wrote.

Mr. Jefferson, vice president for academic affairs and dean of faculty at Davidson College in North Carolina, has been an academic for nearly all the time since 1990, when he earned his Ph.D. in economics, specializing in monetary economics and finance, at the University of Virginia. He was an economics professor at Swarthmore College from 1997 to 2019 and spent a year as a staff economist in the division of monetary affairs at the Fed board in the 1990s.

His research has focused on labor markets and poverty, including a 2008 paper that examines economic volatility faced by African-American families and female-headed households and its relationship to declining volatility in economic output. In 2005, he analyzed the costs and benefits of policies that promote a “high-pressure economy” to spur tighter labor markets, arguing that the latter outweighed the former.

In a 2018 interview with a publication of the Minneapolis Fed, Mr. Jefferson discussed the challenges of being a member of a minority group in the economics field. “I have never been in an economics department with another African-American economist. Never,” he said. “My passion and enjoyment of learning new things, of writing and having a voice in different conversations, compensates me for the absence of colleagues who look like me.”

Ms. Cook formerly served as a senior economist on the White House Council of Economic Advisers in the Obama administration. She has a Ph.D. in economics from the University of California, Berkeley and bachelors degrees from Spelman College and Oxford University.

She wrote her doctoral dissertation on the underdevelopment of Russia’s banking system after the collapse of the Soviet Union, a feature she attributed to weak property rights.

The project created the germ of what would become her best-known research: a paper exploring the effect of violence and terrorism against Black Americans on innovation between 1870 and 1940.

Ms. Cook expressed support for programs in Mr. Biden’s economic agenda during a recent Fed conference on gender and the economy. Asked on a Nov. 8 panel to identify three policies that would be most impactful in addressing discrimination and lack of opportunity, Ms. Cook cited child-care and elder-care support, paid family leave and infrastructure. All are included in either the bipartisan infrastructure package that was enacted this year or in the social-spending and climate legislation that passed the House, but has stalled in the Senate.

—Paul Kiernan and Ken Thomas contributed to this article.

PrevPreviousTech That Will Change Your Life in 2022
NextU.S. Home-Price Growth Slowed Again in OctoberNext