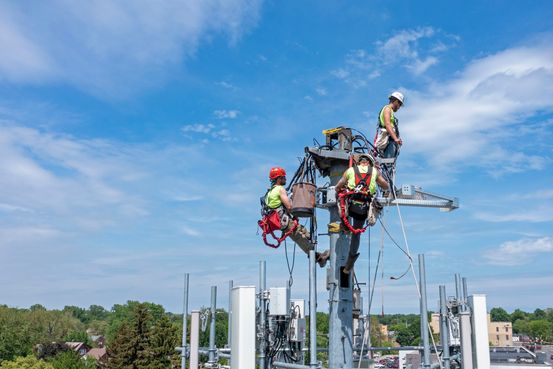 The cellphone carriers on Sunday offered a counterproposal that would further dim the power of their new 5G service for six months to match limits imposed by regulators in France, giving U.S. authorities more time to study more powerful signals’ effect on air traffic. The companies had planned to launch the service Wednesday in up to 46 of the nation’s largest metropolitan areas.

“If U.S. airlines are permitted to operate flights every day in France, then the same operating conditions should allow them to do so in the United States,” the chief executives wrote in a letter reviewed by The Wall Street Journal.

The Federal Aviation Administration has been preparing to issue flight restrictions that could go into effect around the country as soon as Wednesday. The limits could restrict pilots from using certain automated systems to help land aircraft in bad weather, a move that could disrupt air travel and cargo shipments.

“U.S. aviation safety standards will guide our next actions,” the FAA said Sunday. The agency declined to comment about when it might issue the flight limits in official notices to air missions.

Telecom-industry officials have pointed to dozens of countries, including France, that have already allowed cellular service over parts or all of the frequencies in question, known as C-band. France is among the countries that have imposed wireless limits near airports while regulators study the effect the signals have on aircraft.

The letter by AT&T CEO

was in response to one sent by Transportation Secretary

late Friday. The New Year’s Eve missive asked the carriers to postpone their planned 5G launch by “no more than two weeks” while officials worked to address the wireless services’ effect on specific airports over the coming weeks.

AT&T and Verizon disputed officials’ claims of air-safety risks. The companies postponed a planned December debut of the new signals to provide more time for telecom and aviation regulators to share information about the wireless infrastructure and aircraft equipment in question.

But the telecom CEOs said transportation regulators’ latest delay request would be to “the detriment of millions of our consumer, business and government customers.” The CEOs noted that carriers spent more than $80 billion to acquire the licenses in a Federal Communications Commission auction that closed in January 2021.

FCC authorities padded the spectrum they auctioned with a swath of buffer frequencies to prevent interference with cockpit systems. But air-safety regulators have expressed concern that more sensitive altimeters could mistake cellular transmissions for terrain.

AT&T and Verizon have spent the past year preparing to turn on new signals to provide new fifth-generation wireless technology, a faster and more capable mobile service. Wireless companies in other countries already use similar frequencies, but the spectrum wasn’t available to U.S. providers until recently.

Without a resolution to the dispute, Messrs. Buttigieg and Dickson warned the FAA’s flight limits would bring severe economic consequences.

“Failure to reach a solution by Jan. 5 will force the U.S. aviation sector to take steps to protect the safety of the traveling public, particularly during periods of low visibility or inclement weather,” they wrote in their Dec. 31 letter.

More WSJ coverage on the debate over wireless frequencies and aviation, selected by the editors.

Over the past week, U.S. air travel has been snarled by a mix of winter storms and staffing challenges because of increasing ranks of airline crews calling in sick with Covid-19 as the U.S. deals with a surge by the Omicron variant. Thousands of flights have been canceled and delayed.

The competing proposals are the latest in a flurry of behind-the-scenes work by aerospace manufacturers and wireless companies, their regulators and senior White House officials. As they attempted to hammer out solutions to allow the new 5G service to go live without prompting severe flight restrictions, the trade group Airlines for America asked the FCC to consider an emergency request to delay the wireless rollout.

The airline trade group said Sunday it continued to urge the FCC and telecom industry to work with the FAA and aviation industry to reach a compromise.

The FCC is an independent agency that acts outside the Biden administration’s direct authority. The commission hasn’t shown an interest in limiting licenses that it found safe to grant in a 2020 order authorizing the 5G auction.

An FCC spokeswoman declined to comment on the airline group’s request but said the commission remained optimistic that “by working together we can both advance the wireless economy and ensure aviation safety.”