Apple Stays on Top for Phone Sales in China 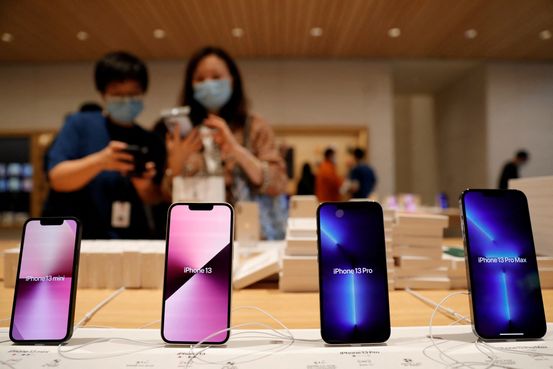 secured the top spot for phone sales in China for a second straight month in November, according to market research data, driven by the success of the iPhone 13 series.

The Cupertino, Calif.-based company had a 23.6% market share in November, according to market research firm Counterpoint Research, after outperforming all other phone makers a month earlier for the first time since 2015.

Its nearest rival, Vivo, had a 17.8% market share in November, according to the data.

Apple’s move to keep prices of this year’s iPhone 13 series in line with iPhone 12 models has been a hit with Chinese consumers, who account for about a fifth of total iPhone sales.

on Nov. 11, when the Singles Day event kicked off.

Apple’s sales grew 15.5% in November from a month earlier, according to the Counterpoint data.

Apple is also benefiting from the troubles of its former biggest local rival in China for the high-end smartphone market, Huawei Technologies Co. Shipments and sales of Huawei’s premium phone models have plummeted since the company was hit by U.S. sanctions last year.

However, Apple’s top spot in China may be short-lived.

of losses caused by supply constraints for semiconductors and other materials. In September, Mr. Cook said prices were set region by region based on a variety of things including costs, competition, local conditions and exchange rates.

Consumers in China are now seeing delivery estimates for the iPhone 13’s high-end models shortened to less than a week from about 20 days in early November. Some of China’s biggest e-commerce sites still limit each consumer to only two units for some popular models.

iOS 15 latest features, and what will change on your iPhone