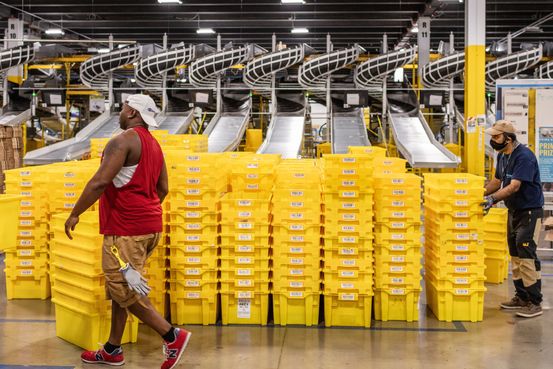 is aiming to hire 150,000 seasonal workers in the U.S., a move to get needed workers for the holidays against a tight labor market.

The number of seasonal hires is more than the 100,000 Amazon announced last year and matches the number that rival

said it would add this year.

The additions build on Amazon’s plans, unveiled in September, to increase its ranks of permanent employees by 125,000. The e-commerce company is also adding 40,000 people to its tech and corporate staff.

Shares of Amazon were about flat in morning trading Monday. The stock is up 4.6% over the past 12 months.

Retailers are working to hire large numbers of staff ahead of the holidays at a time when workers are scarce in many industries. Businesses from stores and restaurants to amusement parks and manufacturers are competing for workers, in some cases offering pay raises, hiring bonuses and other perks.

During the pandemic, some parents have stayed out of work to care for children while they were home from schools and daycare. Other people have taken time off to re-evaluate their priorities. The labor force is smaller, by about 4.3 million workers, than it would be if workforce participation returned to pre-pandemic levels.

Amazon had 950,000 U.S. employees and 1.3 million permanent workers world-wide as of July.

After pay increases rolled out earlier this year, Amazon jobs have an average starting wage of $18 an hour, the company said. Seasonal workers are also eligible for sign-on bonuses and hourly bonuses on some shifts.

Amazon’s seasonal job postings are concentrated in 20 states, including New York, Texas and Virginia. There are 23,000 openings in California, 6,200 in Arizona and 4,500 in Illinois, Amazon said.

Some of Amazon’s largest competitors have also laid out ambitious hiring plans. Walmart said last month it is aiming to add 150,000 people to its U.S. workforce of about 1.6 million.

Shippers, whose role in holiday shopping has leapt with the rise of e-commerce, are growing, too.

are planning to bring on a combined 200,000 package handlers and other workers.

Take a quick gander through your Instagram and TikTok feeds, and sure enough, you’ll find a post with the Gabbi bag by JW Pei adorned

Fauci says the Omicron variant will inevitably appear in the US: Coronavirus Updates: NPR

Following the discovery of a new variant of COVID-19, the UK has imposed new restrictions on arriving travelers from South Africa and other southern African

Awesome Things to do in St. Kitts

St. Kitts was one of the first Caribbean Islands we truly explored. Before visiting St. Kitts, we had only taken Caribbean vacations to relax in