Forty years after releasing “Back in Black” — one of the best-selling albums of all time — AC/DC is still plugging away with a new LP, “Power Up,” out Friday.

The secret to the Rock & Roll Hall of Fame band’s staying power is hardly rocket science, though.

Lead guitarist and co-founder Angus Young — who joined the Zoom call from Sydney, Australia — added that the key to AC/DC’s longevity has been the group remaining true to itself since forming in 1973.

“From the beginning, our main musical style always was guitar-based rock,” said Young, 65. “So it was always retaining that style and not deviating from that.”

Indeed, that signature sound is on full, forceful display on AC/DC’s comeback album — the band’s first since 2014’s “Rock or Bust.” Perhaps more significantly, it’s the band’s first LP since the death of co-founder Malcolm Young, Angus’ older brother, of complications from dementia in 2017.

“It’s kind of tough in that sense, ’cause we all miss him, but we feel his presence,” said Young. “When we were doing the album, we still felt he was there with us. When you’re in the studio, you’re always looking around to see if you see him. He always will be there with us in spirit.”

“A lot of these songs Malcolm and myself had worked on through the years,” said Young. “I concentrated on the songs that I knew he really loved. If you got to give a tribute to him, that’s the best way.”

Due to his failing health, Malcolm was replaced on rhythm guitar by his and Angus’ nephew Stevie Young, 63, on “Rock or Bust.” “Stevie filled in once for Malcolm on a tour with us in the late ’80s,” said Young. “And Stevie is like a mirror of Malcolm.” 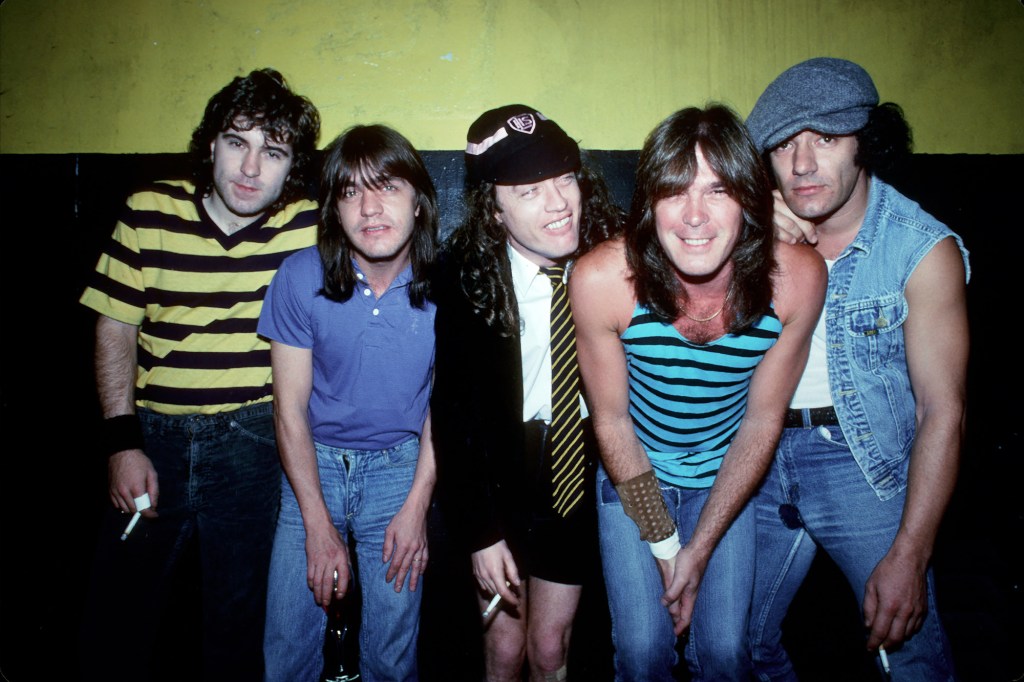 The band has welcomed new members and said goodbye to original members — but their classic sound has remained steady.

The wealthy Arizona PR exec who went viral for smashing…

Johnson himself replaced Bon Scott — who died from alcohol poisoning in February 1980 — before the making of “Back in Black.”

“For me, it’s the happiest time of me life,” he said of those 1980 recording sessions in the Bahamas. “I’m pleased the rest of you liked [it], otherwise I’d be dead now.”

Although “fortunate” to find Johnson as a replacement, Young said, “We were going into the unknown because we didn’t know if people would accept it … We called the whole album ‘Back in Black’ for Bon, because when you’re paying respect to somebody who you’ve lost, you wear the dark clothes. It was our tribute to him.”

Due to the coronavirus crisis, the members of AC/DC haven’t seen each other in the flesh since February, when they rehearsed and shot the video for “Shot in the Dark” — the first single from “Power Up” — in Holland.

“It was just such a happy time,” said Johnson. “We were there for about just shy of a month.”

But then COVID hit and AC/DC had to power down with an album that was already done. During quarantine, Johnson said, “I’ve re-learned the art of sitting down in front of me sound system and putting a vinyl record on. Little Richard and Elvis Presley — you know, the old vinyl.”

For his part, Young has been “watching a lot of reruns of ‘The Munsters’ and ‘The Addams Family.’ ” But he can’t wait to shake us all night long live again.

“Hopefully we might get around to the time when we can actually play on a stage and play in front of people again,” he said. “Fingers crossed.”

The White House and Democratic leaders are pushing for an agreement on a draft bill this week, before the president sets off on an overseas

“He loves that we still think about him.” In September 2020, Chrissy Teigen revealed that she and her husband John Legend had lost their pregnancy,

BERLIN — A criminal court in Munich sentenced a German convert to Islam to 10 years in prison on Monday, finding the woman guilty of

Angry Disney fans are calling for the Mouse House to ban inappropriate garb after a couple was photographed wearing sexually suggestive T-shirts at Disney World.

5 times Monica was our beauty and fashion goals

In honor of the singer’s 41st birthday, we give Monica her fashion and beauty flowers on the profound impact she has had on women in

Everything to Know About the Fendi x Skims Collaboration – WWD

The Fendi x Skims capsule collection is happening. After images of the collaboration were leaked on Instagram earlier this month, as reported, a confirmation came