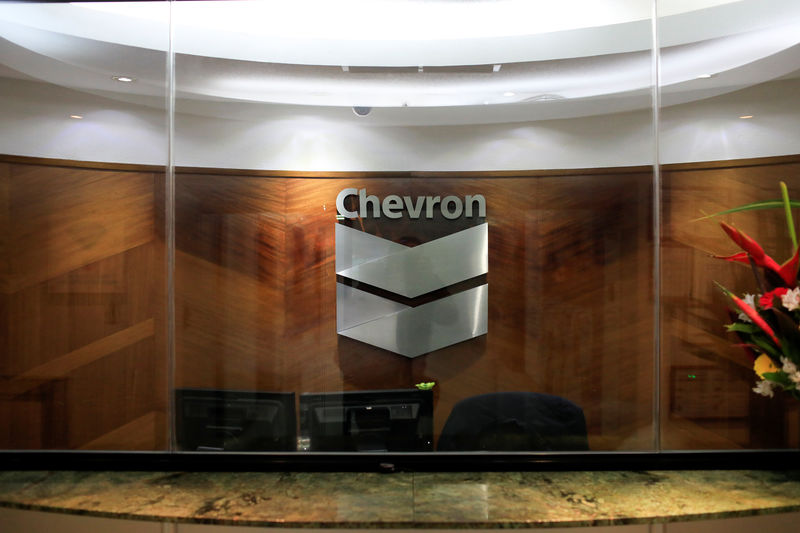 © Reuters. The logo of Chevron is seen at the company’s office in Caracas

(Reuters) – U.S. oil major Chevron Corp (N:) said late on Friday it is optimistic about maintaining a presence in Venezuela even amid U.S. sanctions on the country and state oil company PDVSA as part of Washington’s effort to oust President Nicolas Maduro.

The company’s remarks follow an earlier report by Bloomberg that said the United States is considering extending Chevron’s waiver to operate in Venezuela with more limitations by granting the company a 90-day sanctions reprieve.

“We are a positive presence in Venezuela, and we are hopeful that General License 8C is renewed so that we can continue operations in the country for the long-term,” Ray Fohr, a Chevron spokesman, told Reuters in an emailed statement.

“We have dedicated investments and a large workforce who are dependent on our presence.”

“General License No 8C” is the license that authorizes transactions in Venezuela involving PDVSA and entities it owns, according to the website of the U.S. Department of Treasury.

Chevron’s future in Venezuela now depends on U.S. President Donald Trump, who must decide by Oct. 25 whether to renew the waiver allowing the company to keep operating in Venezuela despite U.S. sanctions.

The Treasury Department aims to further limit Venezuela’s crude production and is concerned that Chevron’s joint venture projects in Venezuela are providing financing to help Maduro’s socialist government pay back its debt to Russian oil company Rosneft PJSC, Bloomberg reported on Friday. This could encourage more loans in the future.

The report added, however, that the United States also wants to maintain a presence in Venezuela’s oil industry in case of a political transition.

Chevron has been present in Venezuela for nearly 100 years. It opened its Caracas office in 1923, and first struck oil at the Boscan field in 1946.

The Trump administration has several times imposed sanctions on Venezuela and sought to limit PDVSA’s transactions to largely cut off Maduro’s access to oil revenues, which account for most of the South American country’s hard currency income.

The Treasury Department did not immediately respond to a Reuters request for comment late on Friday.