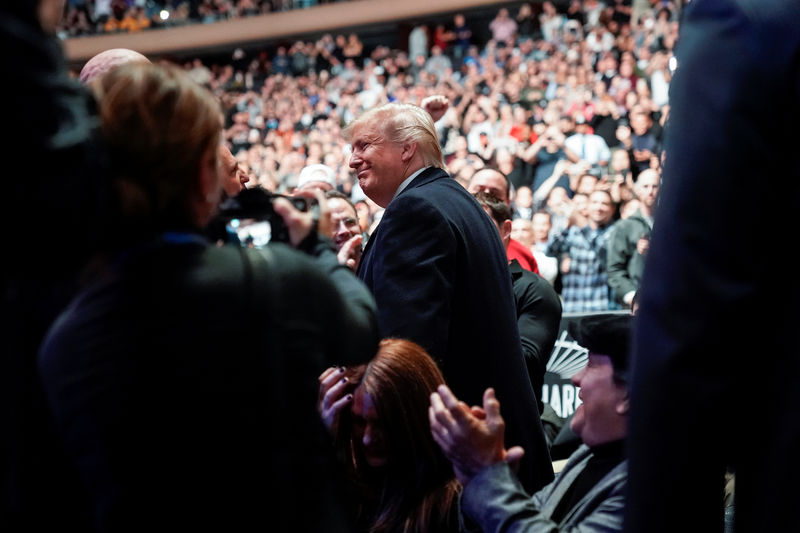 NEW YORK (Reuters) – U.S. President Donald Trump presided over a bruising Mixed Martial Arts (MMA) showdown on Saturday in his first visit to New York City after declaring his exodus from the Big Apple (NASDAQ:) and as an impeachment inquiry looms over his presidency.

Days after being booed at a World Series game in Washington, Trump was greeted by an ovation from many fans of the contact sport gathered to watch fighter Nate Diaz face off against Jorge Masvidal in an Ultimate Fighting Championship match at Madison Square (NYSE:) Garden.

Flanked by key Republican lawmakers and his sons, Eric and Don Jr., Trump stood up and waved from his seat just feet from the octagon, drawing cheers from the 20,000-strong crowd.

A smattering of boos could be heard when he entered.

For Trump, the visit was a welcome break from a House of Representatives impeachment probe of allegations he withheld aid from Ukraine to pressure authorities there to investigate his political rival, former Vice President Joe Biden.

At a rally on Friday in Mississippi, Trump said an “angry majority” of voters would support him against impeachment, a day after the Democratic-controlled House voted formally to lay out the rules of the inquiry.

Trump’s visit was his first to New York since announcing he was moving his permanent residence from Trump Tower on Fifth Avenue to his Mar-a-Lago estate in Palm Beach, Florida.

New York Governor Andrew Cuomo tweeted “good riddance” after Trump slammed local officials for treating him badly despite his paying what he said were “millions” in taxes there.

Several dozen demonstrators, including members of local anti-fascist groups, gathered outside the venue in Midtown Manhattan to protest Trump’s visit, some holding placards that read “Impeach Trump” and chanting “Out now!”

The life-long New Yorker also has a long relationship with MMA and UFC President Dana White. Trump hosted UFC events at his since-bankrupt Taj Mahal casino in Atlantic City decades ago when the sport was spurned by most venues, White said in an interview last year with The Hill.

“I would never say anything negative about Donald Trump because he was there when other people weren’t,” said White, who spoke at the 2016 Republican National Convention in support of Trump’s candidacy.

Trump has a taste for martial arts. During a visit to Japan earlier this year, he spent what he said was an “incredible evening” watching sumo wrestling in Tokyo with Prime Minister Shinzo Abe.

The Washington Post reported on Saturday that Nationals pitcher Sean Doolittle would skip the traditional visit to the White House to mark the team’s victory, saying he “just can’t” celebrate with Trump.

Doolittle, 33, was quoted as saying he would not go because his wife’s parents are lesbians and he has a disabled brother-in-law, and Trump has mocked both lesbians and the disabled.