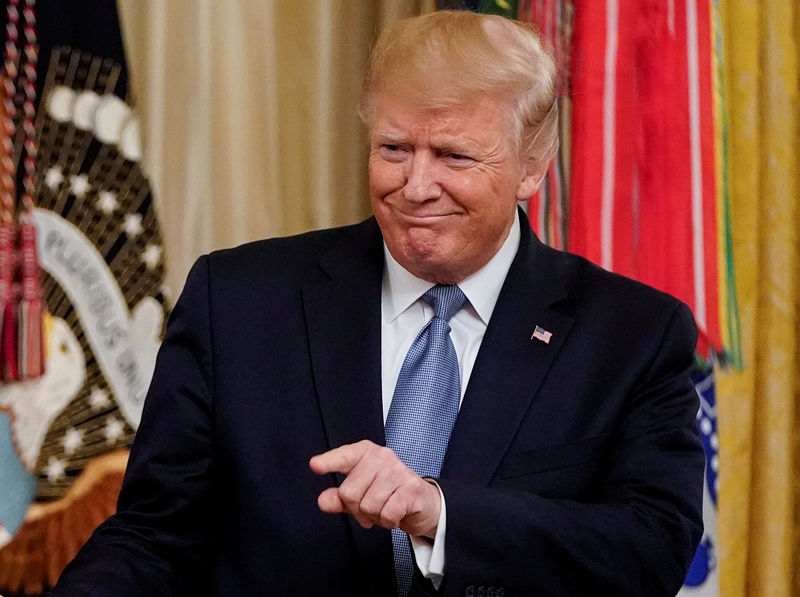 WASHINGTON (Reuters) – “READ THE TRANSCRIPT!” U.S. President Donald Trump exhorts regularly on Twitter, referring to a telephone call with Ukraine’s president that led to an impeachment inquiry. Now he is threatening to do just that – on live television.

Trump told the Washington Examiner he would not cooperate with congressional impeachment proceedings and might read out loud a transcript of a July 25 call in which Trump asks President Volodymyr Zelenskiy to investigate a domestic political rival.

“This is over a phone call that is a good call,” Trump told the Examiner in an interview. “At some point, I’m going to sit down, perhaps as a fireside chat on live television, and I will read the transcript of the call, because people have to hear it. When you read it, it’s a straight call.”

The Trump administration in September released a detailed summary of the 30-minute call – not a precise transcript – based on notes taken by aides, as Democrats in the House of Representatives began looking into Trump’s call following a whistleblower complaint.

The House, which is controlled by Democrats, approved rules on Thursday for the next, more public, stage in the inquiry into the Republican president’s attempt to have Ukraine investigate a domestic political rival.

The inquiry centers on whether Trump solicited foreign interference and aid in a U.S. election, which federal law prohibits. Democrats are also investigating whether Trump withheld $391 million in American aid to vulnerable Ukraine, who faced a military threat from Russian-backed separatists, as leverage to get Zelenskiy to announce an investigation into former Vice President Joe Biden and his son Hunter. [

Biden is a leading contender for the Democratic nomination to face Trump in the November 2020 presidential election. Hunter Biden sat on the board of a Ukrainian energy company. There has been no evidence of wrongdoing on their part.

Current and former Trump administration officials have testified behind closed doors that the White House went outside normal diplomatic channels to pressure Zelenskiy to investigate the Bidens.

Trump has insisted he did nothing wrong. He said his administration would continue to not honor document requests and subpoenas.

He told the Examiner he would fight back with a defense of the Ukraine call and use his well-honed art of the slogan, offering T-shirts emblazoned with “Read the transcript.”