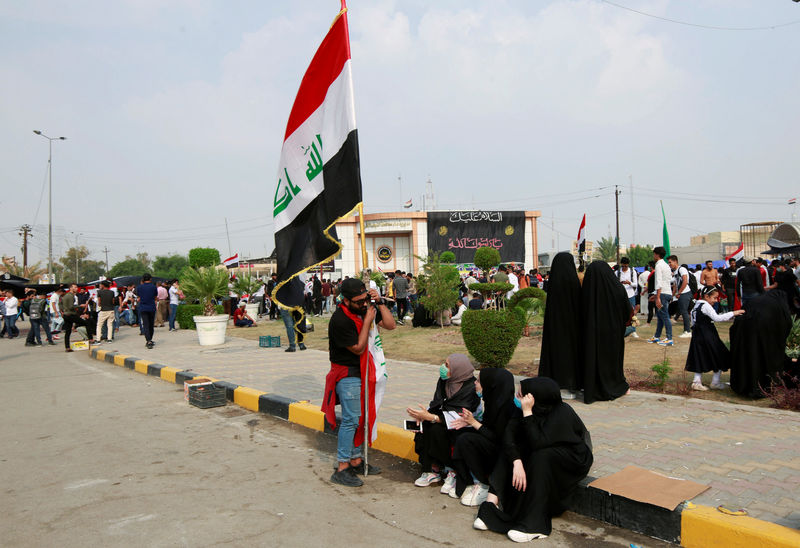 BAGHDAD (Reuters) – Iraqi security forces on Monday fired tear gas at school and university students who defied a warning from the prime minister and joined anti-government protests that have left more than 200 people dead over the past month.

A spokesman for Prime Minister Adel Abdul Mahdi, whose position is increasingly precarious as he faces the largest challenge since he came to power a year ago, said on Sunday that anyone disrupting work or school days would be severely punished.

Mass street protests in Baghdad and other cities in the southern Shi’te heartland against economic hardship began at the start of the month and resumed on Friday after a pause of about two weeks.

Thousands of Iraqi protesters had gathered in Baghdad’s central Tahrir Square (NYSE:) on Sunday, defying a bloody crackdown that had killed scores over the previous two days, and an overnight raid by security forces seeking to disperse them.

Protesters feared a repeat on Sunday night but no raid came, only the occasional tear gas canister. After a weekend in which at least 74 people were killed, a reprieve from violence came when no deaths were recorded in Baghdad or elsewhere overnight. About 231 people have been overall killed in October.

Videos on social media showed security forces on Monday launching tear gas at students in one Baghdad district as the protests spread to other pockets of the capital. One video showed a group of schoolgirls running and screaming. Students in five other provinces, mostly in the south, also joined protests.

“We have come out today to demand our rights which have been taken away since 2003 when the American government handed us over to a bunch of thieves,” said Abbas al-Hamzawi, an archaeology student in the southern city of Diwaniya.

“We are here today for freedom, dignity, and a good life. We demand the fall of the regime, the suspension of the constitution, and an emergency government,” he said.

Despite the OPEC member country’s vast oil wealth, many Iraqis live in poverty or have limited access to clean water, electricity, basic healthcare and education. Iraq is struggling to recover from years of conflict following the U.S.-led invasion in 2003 that overthrew Saddam Hussein.

Iraqis blame a political elite they say is subservient to one or other of Iraq’s two main allies, the United States and Iran. Many suspect these powers use Iraq as a proxy to pursue their struggle for regional influence, without concern for the needs of ordinary people.