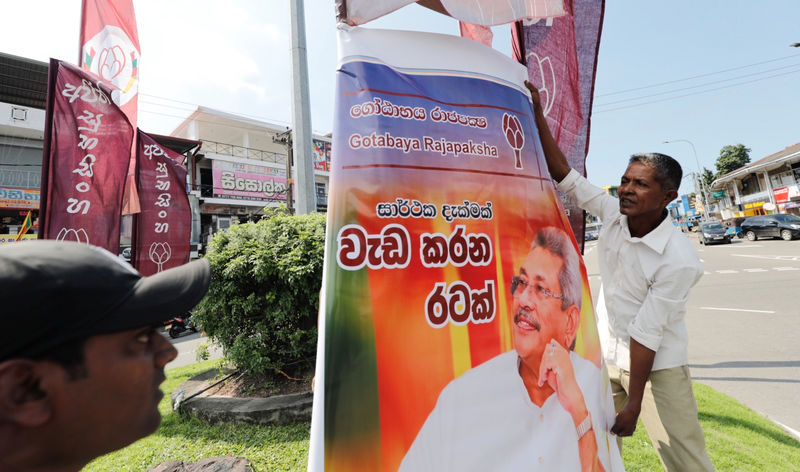 By Sanjeev Miglani and Shihar Aneez

COLOMBO (Reuters) – For Sri Lanka’s majority Sinhalese Buddhists, president-elect Gotabaya Rajapaksa is best-placed to take on the hard challenge of defeating enemies of the state such as those who carried out deadly Easter Sunday attacks early this year.

For others, he is a leader who should be tried for war crimes over allegations of killings, torture and disappearances of scores of people during the final stages of the war against Tamil Tigers in 2009 that he led as defense secretary.

Rajapaksa is the younger brother of former president Mahinda Rajapaksa, and the two nationalists gave the military a free hand to crush the Tamil separatists and end a 26-year civil war that had left more than 100,000 people dead.

Now the 70-year Rajapaksa, who won a presidential election on Sunday, has vowed to drain the swamp of religious extremism that bred the home-grown Islamist suicide bombers who struck at churches and hotels in April, killing more than 250 people. nL5N27X02K

He plans to rebuild the security arms of the state, including its intelligence cells and surveillance networks that he says the outgoing administration dismantled under international pressure.

That has raised fears of a return to a security state like that Rajapaksa created to fight the Tamils, one that could be directed against Muslims who have faced hostility from Sinhalese Buddhists hardliners ever since the attacks, say experts.

“Sri Lanka’s Muslims are among those most fearful of a Gotabaya presidency,” said Alan Keenan, project director for Sri Lanka at the International Crisis Group.

In his first comments following his election victory, Rajapaksa said he would carry all countrymen with him in the new Sri Lanka he planned to build.

A former lieutenant colonel in the army, Rajapaksa has the image of a decisive leader who gets things done, whether it is finishing the war against insurgents or the urban redevelopment of the seaside capital Colombo when he was given that responsibility.

As president, he has offered voters a technocratic, military-style governance, led by professionals rather than politicians.

Rajapaksa, an avowed Buddhist and vegetarian, left the army in the 1990s and moved to the U.S. where he worked in information technology. This year he applied to renounce his U.S. citizenship since Sri Lankan law does not allow candidates with dual citizenship to run for president.

To those who raised issues related to rights abuse during his time as defense secretary he said last month during the campaign : “You’re talking about the past all the time, let’s talk about the future.”