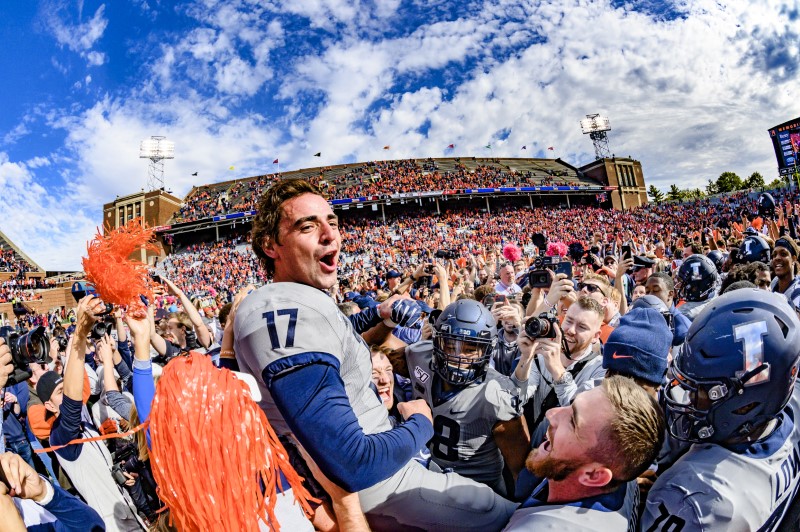 Reggie Corbin rushed for 83 yards and a touchdown for the Illini (3-4, 1-3 Big Ten), who broke a four-game losing streak and scored the final 10 points of the game after two Wisconsin turnovers — a fumble by Jonathan Taylor and an interception by Jack Coan.

Peters’ 29-yard touchdown pass to Josh Imatorbhebhe with 5:53 remaining closed the Illini gap to 23-21, and Tony Adams set up Illinois’ final drive with an interception near midfield with 2:32 remaining, as Wisconsin (6-1, 3-1 Big Ten) gave up three touchdowns in a game for the first time this season.

Taylor rushed for 132 yards and a touchdown, and Coan completed 24 of 32 passes for 264 yards and a touchdown for the Badgers. Taylor became the fourth player in FBS history to rush for 5,000 yards before his senior season, joining Heisman Trophy winners Herschel Walker and Ron Dayne, as well as LaMichael James, with a 16-yard run over left guard on the first play from scrimmage.

Joe Burrow started slowly but wound up breaking the school record for touchdown passes in a season with 29 as the Tigers beat the Bulldogs in an SEC game in Starkville, Miss.

The Tigers (7-0, 3-0 SEC) settled for three short field goals on their first three possessions before Burrow got untracked in the second quarter. He finished 25 of 32 for 327 yards and four touchdowns to four receivers.

Freshman Garrett Shrader made his second start at quarterback for Mississippi State (3-4, 1-3), completing 17 of 28 passes for 238 yards with one touchdown and two interceptions. He ran for 66 yards, including a 12-yard touchdown in the second quarter.

Travis Etienne ran for 192 yards and a touchdown, Trevor Lawrence overcame two early interceptions to throw for three scores and the visiting Tigers extended their winning streak to 22 games by beating the Cardinals.

Etienne topped the 100-yard rushing mark for the second straight game on just 14 carries and essentially put the game away for Clemson (7-0, 5-0 ACC) with a 49-yard touchdown run late in the third.

Jalen Hurts threw for three touchdowns and ran for two more as the Sooners blew out the Mountaineers in Norman, Okla., and improved to 7-0 for the first time since 2004.

Hurts completed all but one of his 17 pass attempts for 316 yards. He also ran for 75 yards. CeeDee Lamb and Charleston Rambo each had 71 receiving yards for Oklahoma (7-0, 4-0 Big 12), with Rambo finding the end zone.

The win spoiled the return of Austin Kendall, who spent the last three years at Oklahoma backing up Baker Mayfield and Kyler Murray before transferring to West Virginia (3-4, 1-3) in the offseason. Kendall threw for 182 yards and two touchdowns.

Clifford passed for 182 yards and three touchdowns and ran for Penn State’s other touchdown. Hamler caught six passes for 108 yards for the Nittany Lions (7-0, 4-0 Big Ten).

Zach Charbonnet rushed for 81 yards on 15 carries and scored twice, while Shea Patterson passed for 276 yards for Michigan (5-2, 3-2).

Quarterback Kyle Trask tossed four touchdown passes as the Gators scored 21 unanswered points in a win over the Gamecocks in Columbia, S.C.

The junior completed 21 of 33 passes for 200 yards and also threw one interception for the Gators. Dameon Pierce rushed for 87 yards on seven carries with a score. True freshman quarterback Ryan Hilinski was 17 of 35 for 170 yards with one score, and Tavien Feaster rushed for a game-best 175 yards on 25 carries and one score for South Carolina.

Running back D’Andre Swift broke a scoreless stalemate with a 39-yard touchdown run with about six minutes to go in the third quarter as the Bulldogs blanked the Wildcats at rain-soaked Athens, Ga.

Swift got into the end zone with 6:20 to go in the quarter, and he would cap the scoring with a 3-yard touchdown run with 6:24 left in the game. He finished with 21 carries for a season-best 179 yards.

Bo Nix passed for a season-high three touchdowns and ran for another as the Tigers beat the Razorbacks in Fayetteville, Ark., to improve to 9-0 after an open date under coach Gus Malzahn.

Auburn (6-1, 3-1 SEC) ran for 298 yards in its first game without leading rusher JaTarvious Whitlow, out with a knee injury. Nix completed 12 of 17 passes for 176 yards, and receiver Seth Williams (NYSE:) had a pair of touchdown catches among his four receptions.

Ben Hicks was 19 of 39 passing for 182 yards and a touchdown as Arkansas (2-5, 0-4) lost its 15th consecutive SEC game. Tight end Cheyenne O’Grady had seven catches for 72 yards, including a 45-yard touchdown reception.

Justin Herbert threw four touchdown passes, the last a 5-yarder to Jaylon Redd with 5:10 remaining, as the Ducks rallied from a 14-point, second-half deficit to defeat the Huskies in a Pac-12 showdown in Seattle.

Cyrus Habibi-Likio rushed for 81 yards and a touchdown on 14 carries for Oregon (6-1, 4-0), and Redd tallied twice on five receptions.

Jacob Eason threw three TD passes for Washington (5-3, 2-3) and Salvon Ahmed rushed for 140 yards and a score on 24 carries. The Huskies reached Oregon’s 35-yard line in the final minute, but Eason’s fourth-and-3 pass was incomplete.

Zack Moss rushed for 99 yards and a pair of touchdowns, becoming the Utes’ career rushing leader and lifting them past the Sun Devils in rainy Salt Lake City.

Moss earned the school record on his second touchdown, a 32-yard sprint that gave Utah its final score with 5:24 left in the fourth quarter. He has 3,264 career yards.

Tyler Huntley threw for 171 yards and an interception on 12-of-19 passing before exiting with a leg injury in the fourth quarter. Utah (6-1, 3-1 Pac-12) won its third straight game and beat the Sun Devils (5-2, 2-2) for the first time since 2016. The Utes also earned a valuable tiebreaker in their quest for a Pac-12 South title.

Cameron Dicker hit a 33-yard field goal as time expired to lift the Longhorns to a wild win over the upset-minded Jayhawks in a Big-12 Conference game featuring 50 combined fourth-quarter points in Austin, Texas.

Dicker’s kick came at the end of a last-gasp, 60-yard drive for Texas, after the Jayhawks had taken a one-point lead on a two-point conversion pass with 1:11 remaining. The conversion followed Kansas quarterback Carter Stanley’s 22-yard touchdown to Stephon Robinson Jr.

JaMycal Hasty totaled 205 scrimmage yards and two touchdowns as the Bears defeated the Cowboys in a Big 12 game in Stillwater, Okla.

Hasty rushed for 139 yards on 15 carries and added 66 receiving yards on three catches for Baylor, which is off to its first 7-0 start since 2015. Baylor is 4-0 in the conference, tied for the lead with Oklahoma.

Oklahoma State’s Chuba Hubbard, the nation’s leading rusher, ran for 171 yards and two touchdowns. LD Brown added a 68-yard score for the Cowboys (4-3, 1-3), who have lost six of their past eight games against Baylor.

Shane Buechele passed for 457 yards and six touchdowns, three to Reggie Roberson Jr., as the Mustangs rolled past the Owls in Dallas.

SMU (7-0, 3-0 AAC) swamped Temple with a big first half and kept up that pace after a short third-quarter lull. The undefeated Mustangs have posted their best start since 1982, when Eric Dickerson and Craig James led them to an 11-0-1 season.

Roberson finished with eight catches for 250 yards as SMU outgained the Owls 655-273. Anthony Russo passed for 171 yards and ran for a score to pace Temple (5-2, 2-1) in a matchup of AAC division co-leaders.

Rodney Smith rushed for 111 yards and two touchdowns on 19 carries as the Golden Gophers improved to 7-0 for the first time since 1960 by beating host Rutgers 42-7 in Piscataway, N.J.

Austin Winfield intercepted two passes, returning one for a touchdown, for Minnesota (4-0 Big Ten), which has won nine straight games dating to last season. Tanner Morgan completed 15 of 28 passes for 245 yards and two touchdowns. Tyler Johnson had six receptions for 130 yards and a touchdown.

Rutgers (1-6, 0-5) lost its sixth straight game and third in a row under interim coach Nunzio Campanile. Johnny Langan was 9-of-19 passing for 48 yards and three interceptions.

Gerrid Doaks accounted for all three of the Bearcats’ touchdowns, including a 27-yard run late in the fourth quarter of a win against the visiting Golden Hurricane in American Athletic Conference action.

Doaks’ last touchdown, with 3:37 left in the game to put Cincinnati (6-1, 3-0 AAC) up by 11, came a play after safety Darrick Forrest intercepted Tulsa’s Zach Smith and returned the ball 16 yards to the Tulsa 27.

Doaks finished with 91 yards on 17 carries at two rushing touchdowns. He also caught a 28-yard touchdown pass thrown by Desmond Ridder, who went 12 of 22 for 172 yards. Smith, a transfer from Baylor, completed 21 of 43 attempts for 243 yards with two interceptions and no touchdowns for Tulsa (2-5, 0-3).

Running back Ke’Shawn Vaughn had 176 yards from scrimmage and two touchdowns, and the Commodores held the Tigers to season lows in points and yards in Nashville, Tenn.

Quarterback Kelly Bryant threw for 140 yards and ran for 72 for Missouri, which had 293 yards. The Tigers (5-2, 2-1 SEC) were a 21-point favorite but saw a five-game winning streak snapped by the same team UNLV throttled 34-10 a week earlier.

Vanderbilt (2-5, 1-3) led 14-7 when cornerback Allan George picked Bryant in the end zone with 6:44 left in the third quarter. Tied 14-14, Riley Neal hit wide receiver Cam Johnson with a long out on third-and-7, and Johnson wiggled his way down the right sideline for a 21-yard touchdown with 8:57 remaining for the winning points.

The Hawkeyes’ sputtering offense finally broke through in the second half against the Boilermakers in Iowa City.

Purdue (2-5, 1-3) cut Iowa’s lead to six on a 1-yard touchdown pass from Jack Plummer to tight end Payne Durham with 24 seconds left, but the Hawkeyes recovered the onside kick. Freshman David Bell led the Boilermakers with 13 catches for 197 yards and a touchdown.

The Mountaineers answered the Warhawks’ early score with 52 consecutive points in romping to a victory in a battle of Sun Belt Conference division leaders in Boone, N.C.

After the West-leading Warhawks (3-4, 2-1) drove 82 yards for a touchdown on their opening possession, running back Darrynton Evans tied the score at 7 with a 59-yard run on the Mountaineers’ third offensive play from scrimmage. Evans finished the first half with 130 of his game-high 136 rushing yards and scored a second touchdown on a 15-yard reception.