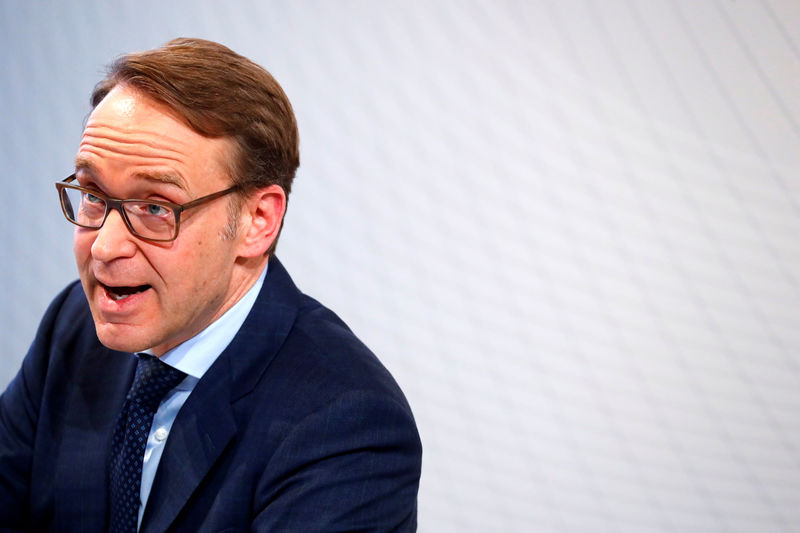 FRANKFURT (Reuters) – The European Central Bank should not be complacent if its ultra- easy policy fuels bubbles because the tools devised to mitigate these imbalances are in their infancy, Bundesbank President Jens Weidmann said on Friday.

With rates likely staying in negative territory for years, the ECB warned this week that bubbles may already be forming but said it was up to governments to place limits on the financial sector as the ECB’s focus should be on raising inflation back to target.

“Monetary policy cannot be complacent if its policy stance raises long-term risks to price stability through the build-up of financial imbalances,” Weidmann told a financial conference.

“We should not be over-confident about the role macroprudential policy can play in addressing systemic risks,” he said. “This policy approach is still in its infancy.”

The ECB earlier this week called on euro zone governments to implement further curbs on the financial sector as house prices are now more than seven percent overvalued and some shadow banks are taking on excessive risk.

The ECB launched a fresh stimulus package in September, over Weidmann’s objections, and some economists are calling for even more support as growth remains weak, particularly in Germany, the euro zone’s biggest economy.

Seemingly rejecting these calls, Weidmann argued that there was no need to respond to every change in the outlook, particularly since there are now tentative signs that the downturn in Germany’s export-oriented industry could level off.

“Our strategy also gives us the leeway not to respond to every slight revision in the inflation outlook mechanistically or even with full force, as long as the overall trajectory is still intact and the relevant inflation expectations remain anchored,” Weidmann said.

Weidmann also appeared to challenge the ECB’s recent argument that its inflation target was symmetric, arguing that aiming for an overshoot could dent the bank’s credibility.

Former ECB president Mario Draghi raised the issue of symmetry around the target in his last few months in office, arguing that its aim of almost 2% was not a cap and inflation could be allowed to overshoot.

“Intentionally higher inflation rates would not be consistent with (the ECB’s) strategy and may pose a communication challenge and a credibility risk,” Weidmann said.

The issue is for the longer term, however, as inflation is expected to undershoot the ECB’s target for years to come, forcing the central bank to keep rates low well into the next decade.

Symmetry and a more precise definition of the inflation target are likely to be part of the ECB’s broader policy review, due to start sometime next year.