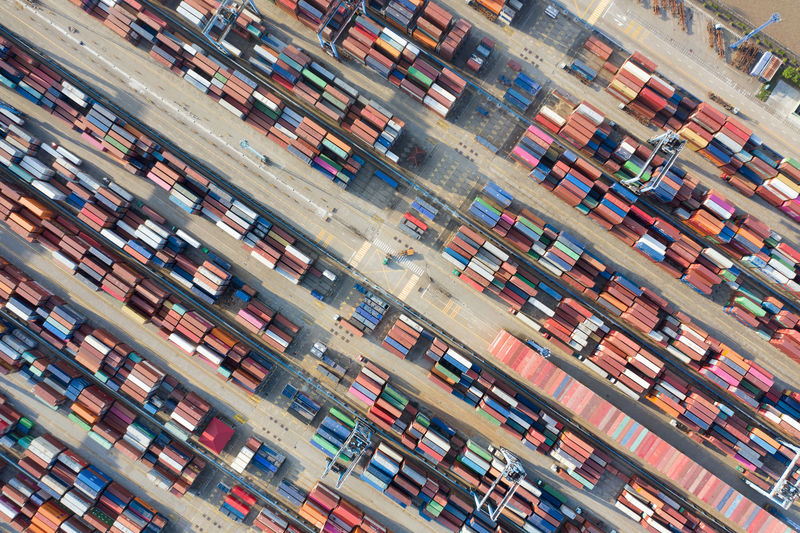 © Reuters. FILE PHOTO: Containers are seen at a port in Ningbo, Zhejiang


By Lusha Zhang and Ryan Woo

BEIJING (Reuters) – China’s exports and imports contracted less than expected in October, providing some relief for the economy as Beijing tries to reach a partial trade deal with Washington.

But even if a U.S.-China trade deal is signed soon, economists say it is unlikely to help boost exports and manufacturing for some time yet and could still mean more stimulus is needed from Beijing to avert a sharper downturn.

China’s October exports fell for the third straight month, down 0.9% from a year earlier, customs data showed on Friday, less than a 3.9% fall forecast in a Reuters poll and September’s 3.2% contraction.

“Even if the “phase one” U.S.-China trade deal crosses the finish line, it is unlikely to alleviate the main headwinds facing exporters and outbound shipments look set to remain weak in the coming months,” said Martin Rasmussen, China economist at Capital Economics.

He attributed the rise in exports to a pick-up in U.S. demand after both countries outlined an interim deal and Washington suspended a threatened tariff hike set for Oct. 15.

There were other bright spots in the data. Exports to the United States in October fell 16.2%, less than a 21.9% drop the previous month, according to Reuters calculation based on customs data.

Betty Wang, senior China economist at ANZ, said anecdotal evidence also showed exports may have been boosted as Chinese firms rushed out hi-tech shipments after the U.S. government put some of the country’s tech firms on a trade blacklist.

If a partial deal is reached this month, it is widely expected to include a U.S. pledge to scrap tariffs scheduled for Dec. 15 on about $156 billion worth of Chinese imports, including cell phones, laptop computers and toys.

China’s imports shrank for the sixth consecutive month, though the 6.4% drop was smaller than an expected 8.9% and September’s 8.5% decline.

Despite the more modest drop in imports, domestic demand appeared to remain weak, with imports of iron ore and falling.

The trade data lines up with recent readings on shrinking factory activity and bleak producer prices. The slowdown points to lingering weakness in domestic demand and the limited impact of policy stimulus so far.

Beijing and Washington have been locked in a trade feud for 16 months, but hopes have risen that an initial deal may be signed soon.

In a new sign of progress that lifted market sentiment, Beijing and Washington agreed to roll back tariffs on each other’s goods as part of the first phase of a trade deal, officials from both sides said on Thursday.

The Chinese commerce ministry, without laying out a timetable, said the two countries had agreed to cancel the tariffs in phases.

In what could be another gesture to boost optimism, China’s state news agency Xinhua reported late on Thursday that the Chinese customs and Ministry of Agriculture are considering removing restrictions on U.S. poultry imports.

China’s trade surplus with the United States was at $26.42 billion in October, up from $25.88 billion in September, according to Reuters calculation based on customs data.

Economists and analysts warn that the path toward a full deal is still highly uncertain and expect that a partial trade deal may only relieve some pressure on the world’s second-largest economy.

“We remain cautious on this. It is unlikely that the bulk of existing tariffs will be removed soon and other types of restrictions are also coming, implying decoupling and tension,” said Louis Kuijs, head of Asia economics at Oxford Economics.

Kuijs and others noted an improvement in import volumes, which could continue to gradually recover especially as local government step up infrastructure spending.

To boost credit, the People’s Bank of China cut the interest rate on its one-year medium-term lending facility (MLF) loans on Tuesday for the first time since early 2016.

Analysts said the cut, while modest, may be a sign the central bank is turning more proactive, following a slew of downbeat economic data suggesting more stimulus is needed soon.