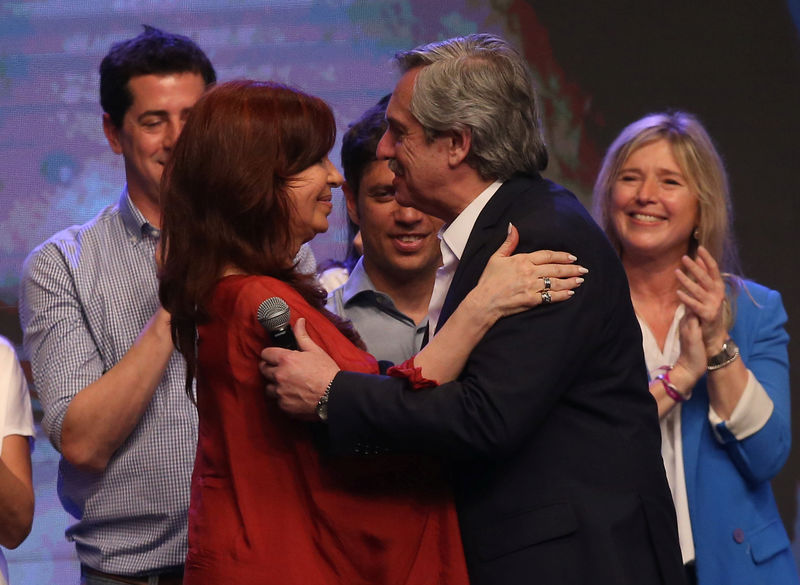 BUENOS AIRES(Reuters) – Argentina’s former president Cristina Fernandez de Kirchner, a rockstar politician adored by the poor but feared by big business and investors, is back, although as vice president this time.

The South American country’s leader for eight years until 2015, “Cristina”, as she is known to fans, returns to the Casa Rosada palace after she and senior running mate Alberto Fernandez scored a decisive victory in Sunday’s election.

The return of the fiery Fernandez de Kirchner is a major twist in Argentine politics, turning Latin America’s third-largest economy abruptly back towards the left after four years under conservative leader Mauricio Macri.

Dressed in a flowing red outfit and appearing as natural as ever on stage after the victory, Cristina made an impassioned plea for every effort by Macri to stabilize the economy until he leaves office.

“Please.. take all the measures you should take to lighten the dramatic situation that is being experienced in the country’s finances. It is your responsibility,” she said, before handing the microphone to Alberto Fernandez.

She later posed for selfies on her way out of the arena, as supporters angled to get near her.

By far the biggest name in Argentina’s Peronist movement, she stunned everyone in May by announcing she would run as the No. 2 on the presidential ticket of her former chief of staff, amid concerns her divisive image would drive away key centrist voters.

A political powerhouse for more than two decades, her star rose as Argentina’s charismatic first lady during the 2003-2007 presidency of her husband, Nestor Kirchner, whom she succeeded, and who died in 2010.

Her second term ended in 2015, amid accusations by critics she was a authoritarian populist who had bankrupted Argentina’s economy with welfare spending and graft. She still faces a series of legal cases over graft accusations, which she denies.

She famously refused to attend Macri’s inauguration and hand over the presidential baton and sash after the two clashed over where the ceremony should take place.

The surprise tactic of taking the deputy role has worked. Fernandez’s star power added glamor to the low-key Peronist ticket and helped tap into popular anger with Macri’s administration, as high inflation and an anemic economy have pushed many Argentines into poverty.

Now voters and investors are bracing for Cristina’s return. Many believe she will have significant sway behind the scenes, though her party has played this down.

“This is Cristina. It’s unrealistic to expect her to be invisible for long,” said Benjamin Gedan, director of the Wilson Center’s Argentina Project in Washington.

“Based on everything we know about her history and personality, she is likely to want to be a major figure in Argentine politics once again.”

During the campaign she kept to the sidelines, instead promoting her memoir “Sincerely” on a book tour that drew huge crowds. Her Twitter feed, normally inflammatory and quick to jab at opponents, has been muted.

Investors said they hoped her role would be cushioned with more moderate Alberto Fernandez as president.

But some are holding their breath to see if she will assume greater prominence in the new government, said Ilya Gofshteyn, a senior emerging markets strategist at Standard Chartered (LON:) Bank in New York.

Investors haven’t forgotten Argentina’s economic woes under Cristina, when a row with bondholders eventually forced the country into technical default in 2014, but have listened to Alberto Fernandez’s subtle signals about a more moderate tack.

“Markets, for the most part, are willing to give the Fernandez ticket the benefit of the doubt,” said Gofshteyn, adding people hoped that “Cristina is not going to be the one in the driver’s seat”.

He added, “But, longer term, that is absolutely the threat hanging over the Argentine political system.”

The ex-president is loved and hated in almost equal measure by voters too.

“I’m terrified of the Fernandezes,” said Marissa Misischia, 52, a psychologist, as she went to vote for Macri in Buenos Aires on Sunday, referring to the running mates who share a name but are unrelated. “Cristina destroyed the economy in the past.”

Carlos Berenguer, a 71-year-old retiree, on his way out of the polls in Buenos Aires, said he hoped Cristina would set the tone for the new government.

“I prefer that Cristina has more leadership experience,” he said. “I believe that she is an educated, righteous and intelligent person.”

Cristina was loved by Argentina’s poor, many of whom credit her policies with helping to lift them from poverty, though her administration did not publish regular poverty statistics. Under Macri, the poverty rate has shot up to 35% as Argentines struggle to make ends meet, government data shows.

Alberto Fernandez is inheriting a weakened economy and depleted central bank reserves, yet a voter base that is eager for a return to the generous social subsidies under Fernandez de Kirchner’s government.

That could be a recipe for tension.

Argentine political analyst Facundo Nejamkis said that while there was support for Cristina amongst hardcore Peronists, most were resigned to Alberto Fernandez’s more centrist route, though if things went badly that could change.

“Of course, if Alberto Fernandez doesn’t do well, then it may be that voters demand Cristina take on a bigger role.”